How Ryan Kavanaugh Failed to Deliver $1 Million to Charity 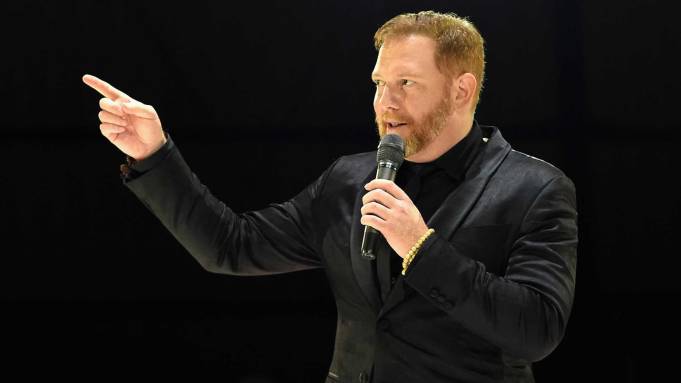 It was the end of a long week for hundreds of volunteers who had come to Los Angeles to build homes for the city’s neediest residents. In a closing ceremony in San Pedro that late fall evening in 2007, the workers learned that a young film financier, Ryan Kavanaugh, had presented an oversized check for $1 million to Habitat for Humanity.

The promised contribution, one of the biggest ever for the charity’s L.A. arm, electrified the crowd of more than 1,000. They were told the cash would help build 250 more homes for the poor, launching a campaign called Building a Greater Los Angeles.

Taking the stage and receiving a plaque for his good deed, Kavanaugh paid tribute to the volunteers as “the true heroes.” With what seemed like abundant humility, he added: “I can only hope that my help will touch a fraction of the lives that … (you) have touched.”

But like many of the promises he made as CEO of the now bankrupt Relativity Media over the past decade, Kavanaugh’s grand gesture proved to be ephemeral. As weeks turned into months and then years, the Relativity leader failed to deliver on the $1 million pledge. His company eventually gave two donations, totaling $35,000, but neither Kavanaugh, nor those he suggested could help with the gift, came through in the end, according to three sources familiar with the episode.

The failure caused disillusionment inside the non-profit and also some embarrassment — because the development came at the end of a weeklong event that was the charity’s biggest in years, with former President Jimmy Carter in attendance. Said one key supporter of the charity, who asked not to be named: “No one had ever done something like that before. To get the kind of attention he did, in front of a U.S. president, and then to do nothing for it, was all just so shocking.”

Kavanaugh’s spokesman, David Shane, says that the Relativity CEO has “raised millions of dollars for philanthropic organizations, and has been honored numerous times for his charitable work.” He noted that in a special Variety issue on philanthropy in 2013, Kavanaugh was cited for his good works, including support of the non-profit Art of Elysium. The founder of that organization, Jennifer Howell, has heaped praise on Kavanaugh for his generosity.

Shane adds that before making the commitment to Habitat in 2007, Kavanaugh and Habitat “had discussed the framework for a $1 million pledge for which Ryan would lead a fundraising effort based on the organization restructuring aspects of its local operation. That agreement was never finalized.”

The unfulfilled promise to Habitat for Humanity L.A. still rankles some individuals close to the group more than seven years later, they acknowledge. They say they’ve seen a reflection of the same kind of behavior in recent weeks in press reports of how Kavanaugh’s company has failed to pay millions of dollars owed to financial companies and vendors. Relativity has liabilities approaching $1.2 billion, and assets it values at about $560 million. The company, or its pieces, will be auctioned off on Oct. 1.

The 2007 fundraiser was part of Habitat for Humanity’s annual “Jimmy Carter Work Project,” which the charity holds in a different city each year to leverage the appearance of the former president and his wife, Rosalynn, to super-charge donations and voluntarism. So Habitat L.A.’s leaders were excited to learn, in late October of that year, that a hefty donation was in the offing.

The organization hadn’t previously been aware of Kavanaugh, a budding mogul at the time, so staffers began poking around. “It was a big deal to have $1 million appear out of nowhere,” recalls an individual familiar with the discussions. “For a charity, it’s like finding a unicorn to have that kind of money show up suddenly like that. It was going to be one of the biggest gifts in the history of the organization.”

Habitat for Humanity’s L.A. leadership convinced themselves that the pledge was real, and that it could be announced at the closing ceremony of the Carter event. A letter on Relativity Media letterhead, dated Nov. 1, 2007, says that Kavanaugh agreed to co-chair Habitat’s L.A. building campaign, along with then-California Gov. Arnold Schwarzenegger and then-Los Angeles Mayor Antonio Villaraigosa.

“Ryan Kavanaugh is further pleased to pledge the campaign’s first ever $1,000,000.00 gift,” the letter continued. “It is expressly understood that we will be giving some and raising some, but agree to get you the full amount over the course of the campaign.”

The organization’s Building a Greater Los Angeles campaign was supposed to run for up to three years. Habitat officials soon received signals that the money would not be produced any time soon, the three sources recount. In a meeting in Kavanaugh’s office at Relativity, the CEO said he was arranging to raise the funds, including through other executives at his company and in the business, two of the sources say. But Habitat L.A. has no record of any payment from Kavanaugh for the rest of 2007 and most of 2008.

Kavanaugh’s lawyer did not shrink, however, from connecting the entrepreneur with the non-profit. In May of 2008, with Kavanaugh facing a drunk driving charge in Los Angeles Superior Court, his lawyer asked to present the judge with a video tribute to the Relativity boss’s philanthropic largess. The video included a mention of President Carter, and Kavanaugh’s commitment to Habitat for Humanity, according to a press account at the time.

The district attorney prosecuting Kavanaugh, deputy D.A. William Clark, tells Variety in an interview that he believes Judge Lawrence Mira declined to view the video, which Clark adds had no relevance. Any difference the video might have made seemed moot a couple of days later, when Kavanaugh pleaded no contest to driving under the influence of alcohol. He had allegedly sideswiped a Los Angeles police car and then fled, though prosecutors dropped the more serious allegations.

Close to a year after making the initial pledge to raise $1 million, Kavanaugh still had not delivered any money, according to the three sources. Two of those individuals say that officials at Habitat for Humanity’s offices then got a call from a Relativity representative, saying the entertainment company wanted to feature the non-profit on its holiday card. The Relativity rep was reminded that the company and its chief had yet given nothing to the charity.

After some discussion, an agreement was reached. Habitat received a payment from Relativity for $25,000 just before Christmas 2008, and allowed the company to use the charity’s logo on its holiday card, the sources say. A year later, Relativity delivered another $10,000, and again referenced Habitat for Humanity on its holiday card, the sources add.

The balance of the funds promised to Habitat for Humanity L.A. never arrived. Says Kavanaugh spokesman Shane: “That agreement was never finalized, and Ryan has not received any correspondence from the organization for more than six years.”

But those who had hoped for the major cash infusion to build homes for the poor look back to what they believe is the ultimate proof of Kavanaugh’s commitment: a photo of the would-be mogul holding an outsized $1 million check alongside Habitat for Humanity L.A. chief executive Erin Rank.

The giant IOU facsimile is made out to Habitat for Humanity. At the top, in bold letters, the check is written in the name of Ryan Kavanaugh. “Relativity Media” is printed below, in a smaller and lighter typeface.

“At the end of the day, he was supposed to be the driving force behind this donation,” says one infuriated Habitat supporter. “He was the one holding up the check for $1 million with a big smile on his face and President Carter there to congratulate him. Apparently, there is no shame.”

Kirstin Wilder contributed to this report.