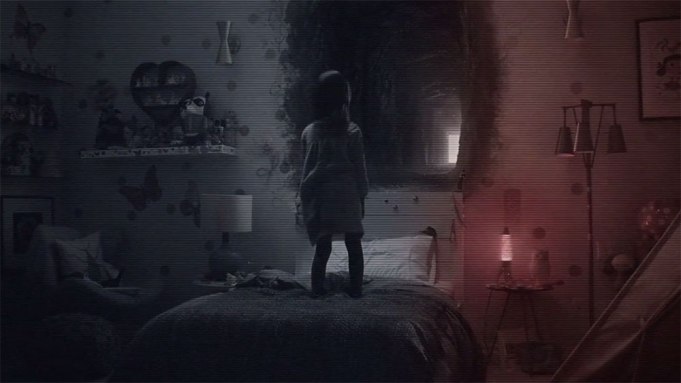 Remember that old urban legend about saying “Bloody Mary” in front of a mirror? The first trailer for “Paranormal Activity: The Ghost Dimension” brings that myth to life.

The new trailer for the sixth and supposedly final installment in the super-low-budget horror franchise introduces the Fleeges family, who have moved into a new house that — surprise — is crazy haunted.

After reviewing some old VHS tapes found in the attic, the family realizes that their spooky situation is no accident. Enter creepy little girls talking backwards, evil demon Toby, scary mirror tricks, etc. Thanks to cameras with a special lens, it looks like the titular supernatural action that was always cleverly obscured will finally be seen by the audience.

“The Ghost Dimension” will star Chris J. Murray, Brit Shaw and Ivy George as the terrorized family. Gregory Plotkin, an editor on the past four films in the series, directs.

The “Paranormal Activity” franchise started in 2007, which scared up insane profit margins with a $193 million box office gross on a five-figure budget. Three sequels inevitably followed after that success, along with a spinoff, “The Marked Ones,” released in 2013 that brought in $90 million.