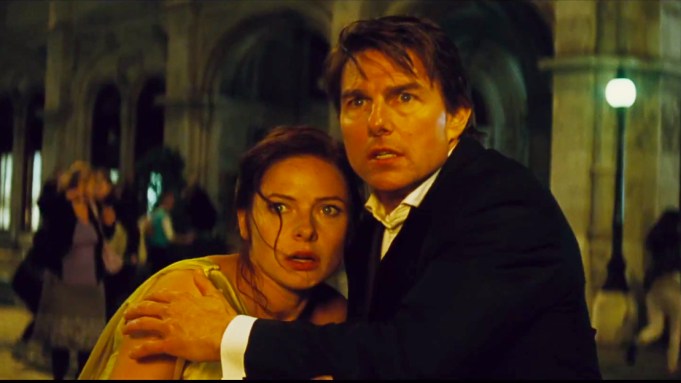 Ready or not, here he comes.

The official trailer for “Mission: Impossible — Rogue Nation” is out, complete with a shirtless Tom Cruise playing hero Ethan Hunt. Returning cast members include Simon Pegg as Benji Dunn and Jeremy Renner as William Brandt as the gang gets back together to take down the Syndicate, the titular evil rogue nation. The cast also includes Alec Baldwin and Rebecca Ferguson (Starz’s “The White Queen”).

As Variety reported on Sunday, that title could be a contentious one. Disney recently announced that its “Star Wars” spinoff will be named “Rogue One,” despite Paramount calling dibs on its subtitle first. J.J. Abrams and his Bad Robot shingle are producing “Mission: Impossible” along with Skydance and TC Productions. Abrams directed and co-wrote the third film in the franchise and was a producer on the fourth. He co-wrote and is directing and producing Disney’s upcoming “Star Wars: The Force Awakens.”