Leonardo DiCaprio Says ‘The Revenant’ Was His Most Difficult Film 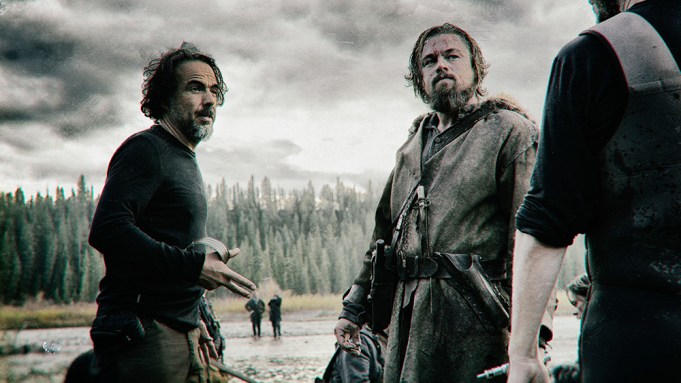 Leonardo DiCaprio says the extreme conditions while filming “The Revenant” meant that “It was the most difficult film, I think, that any of us have ever done.”

The actor made his remarks Monday night at a Q&A session following the screening at the Academy’s Samuel Goldwyn Theatre in Beverly Hills. Fox and New Regency unwrapped the film, one of the year’s most anticipated, for guild and media members at several screenings Sunday and Monday.

DiCaprio said they rehearsed like a stage production for a long time, since the camera moves were intricate and they often had only 90 minutes a day to capture “the beautiful, illustrious Chivo light,” a reference to d.p. Emmanuel Lubezki.

Director Alejandro Gonzalez Inarritu pointed out that there were complicated, single takes that lasted several minutes and they were sometimes filming in 30-below temperatures, adding “conditions were against us all the time.” He said the cold was a big challenge because “I’m a tropical man from Mexico City.”

Inarritu, who was also co-scripter (with Mark L. Smith), said they had just completed the film last week. He had started scouting five years ago, knowing every location in advance, because he knew filming would be tricky.

DiCaprio pointed out that it’s a very straightforward, linear narrative, but “we wanted to find the poetry” in the work about a man who tracks down the people who left him for dead. The actor said the months of preparation were invaluable, because often a lot gets lost in translation when making a film. So it was great to have conversations ahead of time, especially since his character doesn’t speak much: “It was almost like a silent-movie performance.”

Repping the film’s complex and impressive sound were panelists Martin Hernandez and Randy Thom. Hernandez, Inarritu’s longtime colleague, said the filmmaker is more sound-driven than image-driven, and Inarritu acknowledged that he’s a frustrated musician. He paid tribute to the three composers — Bryce Dessner, Carsten Nicolai and Ryuichi Sakamoto — who made “this weird guacamole of music.”

Thom said he joined the film in postproduction, and was asked to design all the sounds for the bear attack. He spent a month on the memorable sequence. His mandate was to create sounds as realistic as possible, and he said it’s easier to exaggerate such sounds, but very difficult to be subtle — “well, as subtle as a bear attack can be.”