Watch: ‘Back to the Future’-Inspired ‘Jaws 19’ Trailer 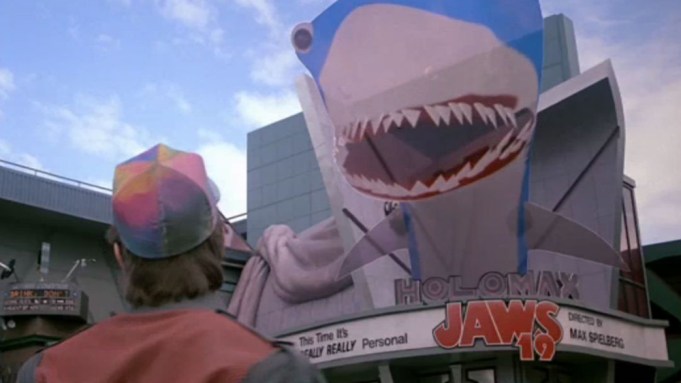 As the day Marty McFly traveled in his DeLorean from 1985 to 2015 in “Back to the Future II” draws near, Universal Pictures continues to tease the film’s futuristic setting.

The studio released a trailer for “Jaws 19,” a movie that was playing in theaters when Marty arrived in Hill Valley on Oct. 21, 2015. Even in the mid 1980s, the film was clearly making a jab at the amount of sequels popular movies inspire and the trailer continues the joke, showing how much more absurd the franchise became with each installment.

The “Jaws” trailer isn’t the only way Universal is celebrating the 30th anniversary of “Back to the Future.” They’ve also released a special 30th anniversary Blu-ray of the trilogy — complete with a short film featuring Christopher Lloyd reprising his role as Doc Brown — and made the movies available to stream for free on Amazon Prime in the month of October.

Pepsi is also releasing Pepsi Perfect, which was the drink of choice in the utopian pre-“Biff got the Almanac” future Marty visited.

From a cyber Jaws attack in “Jaws 7” to the unforgettable battle with Russian shark Ivan Sharkovski in “Jaws 15,” it’s clear the future Marty traveled to had some of the best pics cinema had to offer.