‘Into the Woods’: How the Forest Came to Life (Exclusive Featurette) 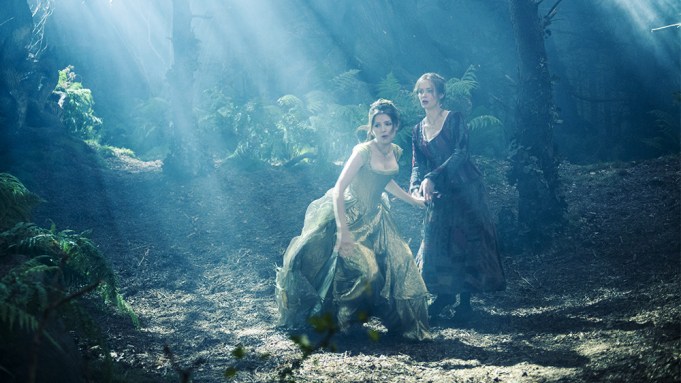 “The woods can be a dangerous place,” warns Cinderella’s Prince, voicing one of the themes of the production design behind “Into the Woods,” Disney’s adaptation of the classic Stephen Sondheim musical.

“The woods really lure all of these characters to discover what they really, really want in life,” explains Emily Blunt, who plays the Baker’s Wife. “I don’t think the woods are necessarily a good influence for most of them.”

The infamous woods serve not only as the movie’s main setting but as an additional character in the story as fairy-tale characters set out to fulfill their wishes, posing an interesting and challenging opportunity. Creating the forest and the heightened reality of the environment was no small task, explains director Rob Marshall, d.p. Dion Beebe, production designer Dennis Gassner, and producers John DeLuca and Mark Platt in the exclusive behind-the-scenes look at the film’s design.

In addition to the challenge of weaving together the stories of Cinderella, Little Red Riding Hood, Rapunzel and more, production staff on “Into the Woods” was tasked with integrating real woods, Dover Castle and an 11th-century abbey with sets that could be controlled and distinguished for various scenes — “One of the hardest aspects of the project,” says DeLuca.

And as the story progresses and the characters find themselves facing new twists and turns in their quests, the woods themselves change from the lighter, inviting setting at the beginning of the film to the mysterious, dangerous and jagged forest in the third act.