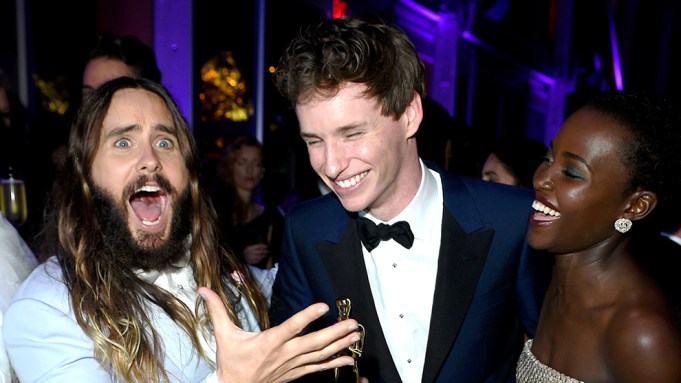 The night doesn’t end when the final Oscar is handed out. In fact, the party is just getting started as stars and execs exit the Dolby Theater, heading to a flurry of post-awards celebrations, including the Governors Ball, the Vanity Fair Party, Elton John’s AIDS Foundation party and more. See below for an insider timeline of the festivities.

4:20 p.m. Musician-producer Nile Rodgers checks in at Elton John’s party ready to perform. “Tonight, it means the world to me,” he says. “I’ve supported his charity for a very long time, and this is the first time I’ve been asked to play at this one. This is cool to play this one in Hollywood.”

4:59 p.m. Harry Hamlin has to pull Lisa Rinna into the Elton John party as she’s busy talking to press.

5:31 p.m. “Glee” star Chris Colfer arrives at the Elton John party, excited to see the host. “He has a wicked sense of humor,” Colfer says. As for who helped him get ready for the bash? “My cat did. He took a nap on my tux.”

6:05 p.m. Alec and Hilaria Baldwin come on stage during first commercial break and announce, “We are here to pay $10,000 and have our photo taken with Elton John,” at the singer’s bash.

6:25 p.m. Aaron Paul poses for dozens of photos with fans who bombard his dinner table.

7:13 p.m. Sharon Osbourne gets on stage saying, “I don’t give a f*** about the Oscars, I just care about raising money for Elton John’s foundation. “

7:26 p.m. Jane Seymour and Harry Hamlin huddled in deep discussion and make sure they have their photo taken with one another.

7:32 p.m. As the In Memoriam segment unfurls, the crowd at Elton John’s dinner applauds for Maya Angelou, Lauren Bacall and Mike Nichols.

7:49 p.m. Over at the Mercedes Benz and African American Film Critics Association Academy Awards Viewing Party at the Four Seasons Los Angeles, a clip of “Selma” is shown during the show, and the crowd erupts. Star Jones, Natalie Cole, actress Vanessa Bell Calloway and a few other girlfriends seated together all raise their glasses toward the screen.

“I’ve got to be honest with you, I am only rooting for ‘Selma’ right now,” Jones told Variety earlier in the night. “I’m not happy with the whiteout at the Oscars. I think the lack of diversity is shameful in America right now. And I don’t like the fact that the promos have featured all black people, but the performance nominations do not. I think it speaks to what Hollywood needs to correct.”

8:09 p.m. Mike Myers takes the stage at the Elton John AIDS Foundation party and tells the crowd that 20 years ago this was the first Oscar party he ever attended. He also mentions that he ran in to his high school classmate David Furnish that year, who was just starting to date Elton John. He then pledges $25,000 to the AIDS foundation.

9:08 p.m. David Furnish takes the stage to kick off the live auction portion of the evening at the Elton John party. Five days in Steven Tyler’s Hawaiian retreat goes for $70,000.

9:30 p.m. End of show. About half of the 3,000 guests at the Oscar ceremony migrate to the Governors Ball, where the theme is “Hollywood Heritage.” Hundreds of vintage photos adorn the walls and are framed on each table.

9:33 p.m. Emmanuelle Chriqui (“Entourage”) leaves the Elton John party. A photographer on the carpet stops her and yells “Nina (Dobrev),” but she answers, “That’s not me. I’m Emmanuelle. I’m on my way out.”

9:38 p.m. At the Governors Ball, Michael Barker and Tom Bernard of Sony Classics accept praise from a line of well-wishers for their victories on “Whiplash” and “Still Alice.” The two express excitement about the wins but are quick to congratulate films from other studios.

9:50 p.m. Elton John takes the stage to announce the winners of the Oscar pool (they got Chopard watches) and encourages guests to “hang out, chill out and enjoy the thunderstorm,” at his party.

9:57 p.m. Nile Rodgers & Chic soon follow him, starting their set off with “I Want Your Love.”

10:00 p.m. As Sergio Mendes and Will.i.am perform at the Governors Ball, Wolfgang Puck’s staff circulate with pot pies, tuna tartare, pizza and ice cream sundaes, while guests wander, schmooze and congratulate each other.

10:05 p.m. Susan Sher, former White House staffer, proudly walks around the Governors Ball carrying the Oscar that her son Graham Moore won for “The Imitation Game” screenplay. Beaming, Moore exclaims, “I still can’t believe it!” and then asks for directions to the on-site engraver who will put his name on the statuette.

10:28 p.m. Rodgers, still performing, recalls a time four years ago when his doctor told him he had “very aggressive cancer and it doesn’t look good for you.” He adds, “So I decided I was going to start writing and doing more concerts than I ever have in my life.” He then says he’s going to do a song that he came up with with Pharrell Williams and Daft Punk and that they’re going to simplify it. He credits the woman up there with him, “Kimberly Williams,” before singing “Get Lucky.”

10:30 p.m. Fox Searchlight co-topper Steve Gilula is among those celebrating the company’s eight wins at the Governors Ball. “My mind was blown. It’s a great night for Searchlight; we’re fortunate to work with great filmmakers.”

10:43 p.m. Actress Italia Ricci (“Chasing Life”) discusses the Oscar show with friends – and the thrill of seeing Neil Patrick Harris in his underwear — at Elton John’s celebration. “I wasn’t mad about that!” she says.

(Emma Stone shows off her Lego Oscar to Julianne Moore at the Governors Ball.)

10:45 p.m. At the Governors Ball, producer John Sloss says he’s happy about Patricia Arquette’s win and, after all this time, he’s still impressed with Richard Linklater’s vision and originality.

10:50 p.m. David Oyelowo, in the red suit and sparkly red shoes that garnered much attention on the red carpet, arrives with energy to the AAFCA party. He’s greeted by an awaiting crew of supporters, who embrace him and are eager to offer their congratulations. “This was still our night,” one assures him.

11:03 p.m. Zoey Deutch and Avan Jogia catch up with Brittany Snow and Tyler Hoechlin, the two couples contemplating the awards show at Elton John’s party. “I feel like they didn’t want to be predictable so they went other way,” Jogia says.

11:17 p.m. Jack Osbourne takes a moment at Elton John’s party to sweetly kiss the head of wife Lisa Stelly, who is now pregnant with his second child (as was just announced a few days ago).

(Eddie Redmayne pays close attention as his Oscar is engraved at the Governors Ball.)

11:45 p.m. Benedict Cumberbatch rubs his pregnant wife’s tummy while sipping a martini at the Vanity Fair party. He then tells J.J. Abrams that he doesn’t know the baby’s gender.

11:51 p.m. After performing “Everything Is Awesome” at the show, Andy Samberg disses the night. “It was very political,” he says inside the Vanity Fair party.

11:57 p.m. John Stamos reunites with Jeremy Olson, grandson of Oscar nominee Glen Campbell, with whom Stamos played drums years prior. “That song killed me. He did such a good job,” Stamos says of Tim McGraw’s performance honoring the Alzheimer’s-afflicted singer.

1:31 a.m. Beyonce is sitting at a booth with Jay Z, looking bored when John Travolta approaches them, makes it past their bodyguard, and plants a big kiss on Beyonce’s cheek.

1:52 a.m. Judd Apatow, who has been talking with stars and guests at Vanity Fair all night, is still going strong, now deep in conversation with “Birdman’s” Michael Keaton.