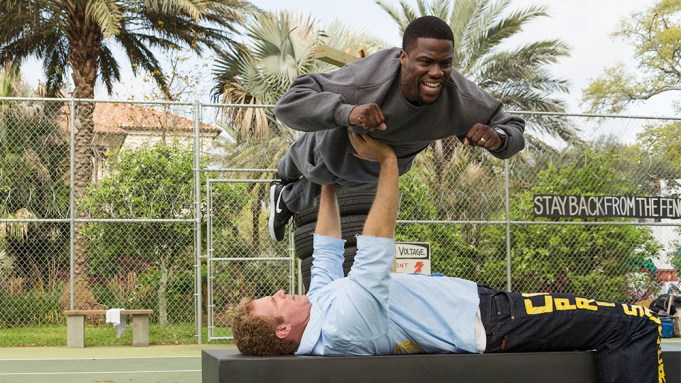 “Orange is the New Black,” “Modern Family” and other television programs routinely offer up sensitive and fully dimensional homosexual and transgender characters, but on the big screen it’s a much bleaker story.

Movies like “Get Hard,” “Ted 2” or “The Wolf of Wall Street” liberally use homophobic terms or poke fun at gay characters, according to advocacy group GLAAD. Beyond a few jokes and putdowns, most major studio films are entirely devoid of LGBT figures. In 2014, for example, only 17 of more than 100 studio releases included lesbian, gay or bisexual characters, and most of those roles amounted to little more than cameos.

“We’re still the butt of the joke,” said Sarah Kate Ellis, CEO and president of GLAAD. “We’re still infrequently seen and when we are seen, it’s in a negative light.”

To illustrate movie studios’ lack of progress, GLAAD is launching a new online video campaign entitled “Hollywood Must Do Better.” It highlights clips from films released over the past five years that deploy gay slurs or feature violence toward LGBT characters. The advocacy group is debuting the video in the wake of last weekend’s Emmy Awards to draw a contrast between the diversity seen on the small screen and the inaction on the part of studio films.

“We want to show people and to build awareness of how bad mainstream films are,” said Ellis. “Our greatest outcome would be for studios to take notice and understand that we are watching, we are paying attention and we are putting a concerted effort into changing things.”

The video will also debut in advance of GLAAD’s studio responsibility index, its annual look at lesbian, gay, bisexual and transgender characters in major studio films. Three years into its rankings, Ellis said she was becoming disheartened about the lack of change. The organization has met privately with executives and creative talent, to little effect.

“There’s a lot of the blame game,” said Matt Kane, director of entertainment media for GLAAD. “Producers and writers are quick to cite other parts of the production process as where the problem lies. They say the scripts aren’t being written or writers are being told they can’t sell scripts with gay characters. It illustrates that it’s an industry-wide problem and old habits are dying hard.”

A case could be made that many of the productions that GLAAD cites in its video, such as “Anchorman 2: The Legend Continues” or “The Wolf of Wall Street,” satirize bigots instead of endorsing their views. However, the group’s leadership believes that studios’ prevailing indifference to the LGBT community means that these off-color jokes and barbs have an outsized impact.

“When jokes are made at the expense of a marginalized group, it creates a dangerous environment,” said Ellis. “This isn’t about being the PC [politically correct] police. It’s about creating a safe environment.”

Indie productions have been more representative, with upcoming films like “Freeheld,” “Stonewall” and “The Danish Girl” centering on gay or transgender characters and lionizing their fight for civil rights. But GLAAD is hoping that these empathetic portrayals won’t be reserved for the art house. It wants comic book movies and tentpole films to include gay characters, particularly because these productions reach international audiences. At a time when countries like Russia and China have anti-gay laws on the books, that could be powerful propaganda, the group’s leaders argue.

“That would be a huge win for us and our community because of their global impact and their ability to show us in different ways,” said Ellis.