Box Office: ‘Focus’ Tries to Prove Will Smith Is Still One of Hollywood’s Biggest Stars 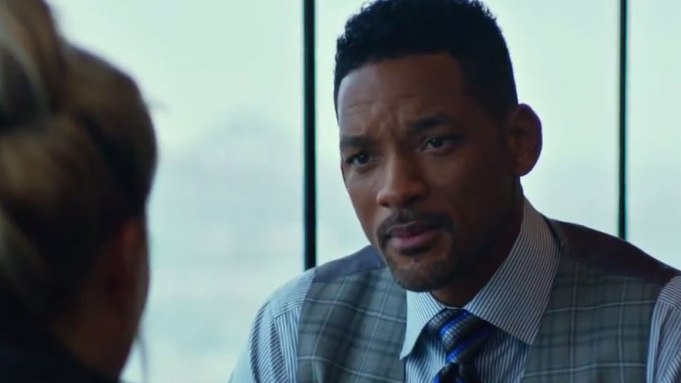 Will Smith will try to prove he’s still one of the brightest lights in the entertainment industry this weekend when “Focus,” his heist romance with Margot Robbie, hits theaters.

Early tracking suggests that reports of the “Men in Black’s” star’s demise as a bankable leading man appear to be premature. The Warner Bros.  film should open to $21 million when it debuts in 3,323 locations, capturing the top spot in what is shaping up to be an otherwise lackluster week at the box office.

“Focus” cost $50.1 million to produce and is leaning heavily on Smith’s charisma in its television spots and posters. At 46, the actor is definitely at a career crossroads, but his recent rap as a faltering box office draw is unearned.

“He’s in the pantheon of actors and leading men that can open a movie,” said Paul Dergarabedian, senior media analyst at Rentrak. “When you raise the bar as high as he has, all of the sudden when you have a movie that doesn’t do well, it’s ‘Houston, we have a problem.’ This guy can still open a movie.”

Of course, Smith has himself partly to blame for the skepticism. His recent comments that box office isn’t as important to him as it once was have only fed the perception that his power is waning.

The weekend’s other new release, Relativity’s “The Lazarus Effect,” should make between $12 million and $14 million when it bows in 2,500 theaters. The micro-budget horror film was produced by Blumhouse and sounds like a spin on “Flatliners,” with Mark Duplass and Olivia Wilde playing researchers who figure out a way to bring the dead back to life. Unsurprisingly, that doesn’t end well. Relativity bought the film for $3 million and has had some success with the shock and scares genre with “The Woman in Black 2” and “Oculus.”

For the first month and a half of 2015, ticket sales have been robust, with “American Sniper” and “Fifty Shades of Grey” driving the box office up 10% over the previous year. Look for that to change. The current crop of releases will have difficulty matching the prior-year period when “Non-Stop,” “Son of God” and “The Lego Movie” all did more than $20 million worth of business.

“January and February were so big, it makes sense that things are going to slow down a little,” said Phil Contrino, vice president and chief analyst at BoxOffice.com.

The rest of the top five will likely be rounded out by holdovers. “Kingsman: The Secret Service” and “The SpongeBob Movie: Sponge Out of Water” should duke it out for third and fourth position on the charts, earning about $11 million apiece.

In terms of milestones, “American Sniper” has made $321.7 million so far and is closing in on the $336 million mark set by “The Hunger Games: Mockingjay – Part 1.” If it hits that figure, it will be the highest grossing release of 2014.

A number of Oscar winners will try to capitalize on last weekend’s awards. Newly minted best picture victor “Birdman” will be in over 1,000 theaters, but the film debuted on DVD and on-demand on Feb. 17, so it shouldn’t see a big boost in ticket sales.

“From a box office bump perspective, I would say it’s pretty de minimis,” said Eric Handler, an analyst with MKM Partners. “It more about the home entertainment window and that’s where they should benefit from the publicity.”

Other films such as “Still Alice” with its lead actress win for Julianne Moore will expand from 765 runs to over 1,300 screens, while “Whiplash” will try to exploit J.K. Simmons’ supporting actor nod by moving from 440 theater to  over 500 screens.  “Boyhood,” which features a supporting actress winning performance from Patricia Arquette, will hold steady on 40 or 50 screens. The coming-of-age drama has been on home-entertainment platforms for months.