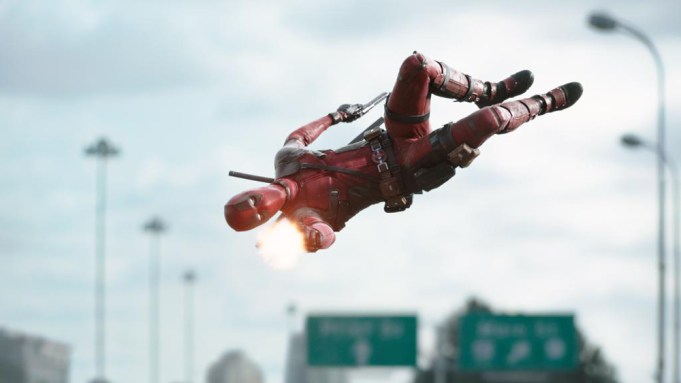 The first trailer for Ryan Reynolds’ “Deadpool” has finally arrived online after premiering on “Conan” Tuesday.

The redband trailer — equally emotional, comical and action-packed — shows Reynolds’ Wade Wilson making the difficult decision to take on superpowers in order to cure the cancer in his liver, lungs, prostate and brain (“all things I can live without,” he says). But not even the most painful surgery can keep the Merc with the Mouth from … well, running his mouth.

“Just make sure you do right by me, so I can do right by somebody else,” he says before undergoing the life-alerting experiment. “And just don’t make my suit green — or animated!”

If you’re wondering what an unmasked Deadpool looks like, T.J. Miller’s character, Weasel, has the perfect description.

“You look like Freddy Kruger face-f—ed a topographical map of Utah,” he says in the trailer. “You are haunting. You look like an avocado had sex with an older avocado.”

Fans have been anxiously awaiting the trailer’s debut since it received a standing ovation at Comic-Con in July.

“For one, I think it’s an absolute miracle that a studio let us make ‘Deadpool,’ let alone a rated-R ‘Deadpool,'” Reynolds told the Comic-Con audience of 20th Century Fox’s willingness to greenlight the film. The actor appeared as a version of the character in 2009’s “X-Men Origins: Wolverine.”

In fact, the film is so R-rated that the NSFW trailer caused Tuesday night’s episode of “Conan” on TBS to be rated TV-MA.