In post, ‘Embrace’ relates the first contact between explorers and Amazon natives, seen from the latter’s point-of-view 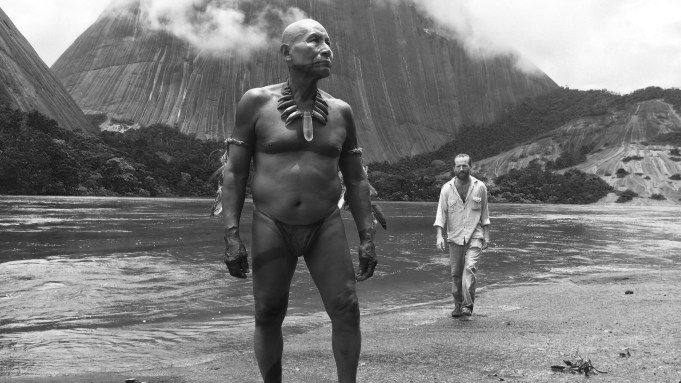 An imposing still — the man, his habitat, the white man trailing behind — and an English-language trailer give more details of “Embrace of the Serpent,” the latest film from Colombia’s Ciro Guerra (“The Wind Journeys”). Now in post, “Serpent” will be released in Colombia this May by Colombia’s Disney distributor Cinecolor, producer Cristina Gallego said at the Cartagena Festival.

Inspired by the journals of the first explorers of the Colombian Amazon, Germany’s Theodor Koch-Grunberg and Harvard U’s Richard Evans Schultes, “Embrace of the Serpent” tells the epic story of the first contact, the encounter, approach, betrayal and, eventually, life-transcending friendship, between Karamakate, an Amazonian shaman, last survivor of his people, who has retreated alone to the deep jungle, and two scientists that, over the course of 40 years, search the Amazon for a sacred plant that can heal them.

Karamakate and one of the scientists, Evan, an American ethno-botanist, embark on a journey into the heart of the Amazon in which past, present and future intertwine, Karamakate begins to regain his lost memories of a torn friendship and the reasons for a deep pain, that will not go away unless he shares his ancestral knowledge, which seemed destined to be lost forever.

U.S. actor Brionne Davis (“Savaged”) and Belgium’s Jan Bijvoet, the lead in Cannes Competition entry “Borgman,” co-star. They play alongside two non-pro actors, Nilbio Torres, from the Cubeo Vaupes people, and Antonio Bolivar, one of the last of the Ocainas.

It was Schultes, one of the first researchers to study indigenous peoples’ use of plants, who observed: “The ethno-botanical researcher… must realize that far from being a superior individual, he – the civilized man – is in many respects far inferior.”

Many directors describe their films in a few terse sentences. Guerra has written a loose verse poem:

Whenever I looked at a map of my country,

I was overwhelmed by great uncertainty.

Half of it was an unknown territory, a green sea, of which I knew nothing.

The Amazon, that unfathomable land, which we foolishly reduce to simple concepts.

Is there really nothing more out there?

Is there not a culture, a history?

Is there not a soul that transcends?

The explorers taught me otherwise.

Those men who left everything, who risked everything, to tell us about a world we could not imagine.

During one of the most vicious holocausts man has ever seen.

Can man, through science and art, transcend brutality?

The explorers have told their story.

A land the size of a whole continent, yet untold.

Unseen by our own cinema.

That Amazon is lost now.

In the cinema, it can live again.

In the cinema, it can live again.

Shot on location in Vaupes, Guainia Colombia, “Embrace of the Serpent” is produced by Cristina Gallego for Ciudad Lunar in co-production with NorteSur (Venezuela), MC Producciones and Buffalo Films (both in Argentina), in association with Caracol Televisión and Dago Garcia Producciones. It received support from the Colombian Development Fund (FDC), Argentina’s INCAA film agency, Venezuela’s CNAC film board, Ibermedia Ibero-American co-production/development initiative, and the Rotterdam Festival’s Hubert Bals fund.