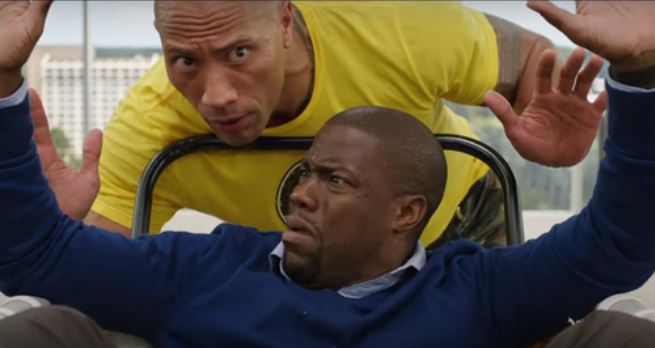 Warner Bros. has released a new “Central Intelligence” teaser trailer, seven months before the June 17 opening of the action-comedy which pairs Dwayne Johnson with Kevin Hart.

“Heroes come in two sizes,” the trailer teases before dishing out a variety of car crashes, gunfights and banter between the stars.

Hart plays a former high school sports star turned accountant who is contacted by a former classmate (Johnson) who used to be overweight and bullied but has since become a contract killer for the CIA. “I need your skillset to save the entire free world,” Johnson tells Hart, much to Hart’s dismay.

Johnson revealed via an Instagram post that this inspiration for his character, Bob, “has always been Tom Hanks in ‘BIG’ with an added twist. He’s a grown man who’s extremely childlike and views the world thru [sic] exuberant and enthusiastic teenage eyes… The ‘added twist’ is Bob has an extremely high IQ and is one of the most lethal men on the planet as a C.I.A. contract killer. Oh the most important character trait.. He hates bullies.”