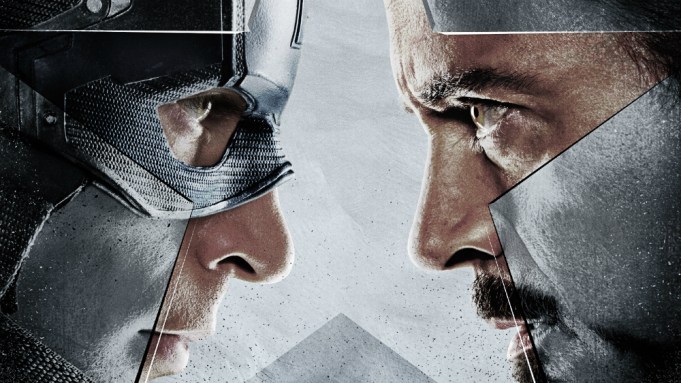 The new footage shows that the source of contention between Downey’s Tony Stark (aka Iron Man) and Evans’ Steve Rogers (aka Captain America) is Steve’s best friend Bucky Barnes (Sebastian Stan), The Winter Soldier, who caused more than a little destruction in the “Captain America” film of the same name. While many factions still see Bucky as a threat, Steve will do whatever it takes to protect him, even coming to blows with his fellow Avengers, including Scarlett Johansson’s Natasha Romanoff/Black Widow.

“I’m sorry, Tony, you know I wouldn’t do this if I had any other choice,” Steve says in the teaser. “But he’s my friend.”

“So was I,” Tony responds darkly, before the footage cuts to Iron Man fighting both Cap and Bucky at once.

The footage also gives a couple of glimpses of Chadwick Boseman’s Black Panther in costume — and even sees the hero coming to blows with Bucky — along with shots of Jeremy Renner’s Hawkeye, Elizabeth Olsen’s Scarlet Witch, Anthony Mackie’s Falcon, Don Cheadle’s War Machine and William Hurt’s General Thaddeus ‘Thunderbolt’ Ross, who wants to hold Captain America and his super-powered allies accountable for their destructive actions. Characters who are MIA in the teaser include Emily VanCamp’s Sharon Carter, Paul Bettany’s Vision, Paul Rudd’s Ant-Man, Frank Grillo’s Crossbones and Daniel Brühl’s Baron Zemo — not to mention Tom Holland’s rebooted version of Spider-Man, who will make his debut in the superhero sequel.

Marvel’s “Captain America: Civil War” finds Steve Rogers leading the newly formed team of Avengers in their continued efforts to safeguard humanity. But after another incident involving the Avengers results in collateral damage, political pressure mounts to install a system of accountability, headed by a governing body to oversee and direct the team. The new status quo fractures the Avengers, resulting in two camps—one led by Steve Rogers and his desire for the Avengers to remain free to defend humanity without government interference, and the other following Tony Stark’s surprising decision to support government oversight and accountability.