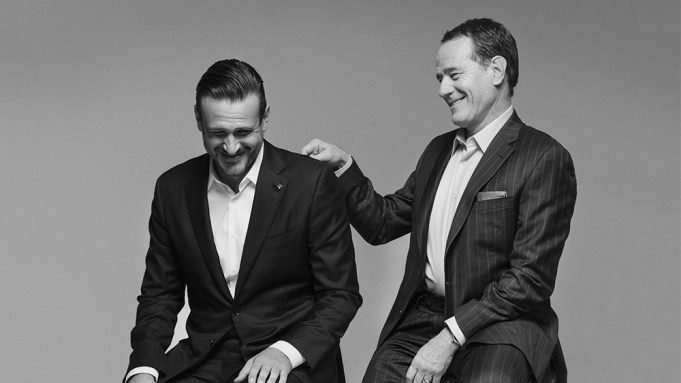 Jason Segel (“The End of the Tour”) and Bryan Cranston (“Trumbo”) came to the Variety Studio to talk about getting into the heads of the charismatic writers they portray in their latest films, the history swirling around those writers and mull over modern-day ennui. The conversation has been edited for space.

Segel: I saw “Trumbo” and I loved it very much. So what made you want to do that movie? What drew you to the part?

Cranston: You know, for us whenever we read something that really resonates, that really leaves an impression on you, it’s the same as when you read a great novel that you want to get back to and read chapter by chapter. This story, about Dalton Trumbo and the Hollywood 10 blacklisted in the ’40s and ’50s and ’60s, it was a dark, dark period in not just Hollywood history but in American history. The story was just so big and so great. The jeopardy of losing your First Amendment rights under the pressure and penalty of imprisonment for no crime committed, and these men went to prison for years, it was so compelling to me and I had to do it. John McNamara’s script then backed up that story with such nuance and beautiful language and crafting.
Then I looked at the character itself. Dalton Trumbo was such a flamboyant, dramatic man.

Segel: It was a meaty part. And they didn’t do anything illegal, it was just their beliefs that got them locked up.

Cranston: No. It was just the thought police, the fearmongers of the time really penetrated the psyche of the American citizen and it wasn’t difficult at the time. In the late ’40s after the war and ’50s, there was about 65% of the population of the country felt that World War III was imminent. It didn’t take a lot to twist that screw a little bit.

Segel: For those who don’t know, Dalton Trumbo was an amazing writer. He wrote “Roman Holiday,” he wrote “Spartacus.”

Cranston: Not only nominated for Oscars, but he won his two Oscars under different names, (for) “Roman Holiday” and “The Brave One.” He was not allowed to put his name on those.

Segel: I had the same thing with “Braveheart.”

Cranston: Is that right?

Segel: Absolutely. I had to write that under a different name. Had you ever worked with Jay Roach before?

Cranston: I had not. I have since worked with Jay. I did a play in New York called “All the Way” about Lyndon Johnson.

Segel: Oh yeah, that’s right. I heard that was fantastic. I didn’t get to see it.

Cranston: Yeah, thanks a lot for showing up. I know you were in New York often and you still didn’t come. The ticket was waiting for you. It said Segel right there. All you had to do was walk up to the box office, but no.

Segel: You know a lot of people want me to come to their shows.

Cranston: But you don’t go.

Cranston: Let’s talk about “The End of the Tour.” How did that come to you?

Segel: I got really lucky. You know, you may have had a similar experience coming from comedy at the beginning of your career, I’m pretty self-aware. I know when a David Foster Wallace script comes across somebody’s desk they don’t go “get Jason Segel on the phone.” This script arrived for me from James Ponsoldt, our director, who said, “I think that you can do this.” He said, “Every time I’ve seen you do comedy there is something sad behind your eyes.” Which is a really uncomfortable thing to hear from a stranger. You think you hide that pretty well.

Cranston: Not just comedy, I see it right now.

Segel: Oh, totally. As soon as they say cut … tears.
I read the script and, it’s sort of like how you said, you’re looking for things as an artist that are sort of reflective on how you feel. There was a line in the script where David Foster Wallace says, “I have to face the reality that I’m 34 years old alone in a room with a piece of paper.” And I thought that is how I feel right now. In our career you’re sort of freelance, where you get a job and it ends you’re unemployed again. I just thought, “yeah I have something to say about that.”
Honestly I feel really lucky because it’s a rare thing in this industry to have somebody want you to do something they haven’t seen you do before. For him to say, “I know this is a big adjustment in perception, but you’re the guy I want for this,” I mean he changed my life.

Cranston: He felt that, did you feel that when you first read it? Did it resonate with you?

Segel: It did. I think the other moment I had was … so I think as an actor you spend a lot of time feeling somewhat resentful you’re not getting the opportunities you want. Then when the opportunity arrives, I was faced with this scary situation where I thought, “I might find out I’m wrong. I might find out I’m not as good as I think I am.” I was really excited to walk into being scared. Being scared is a good motivator.

Cranston: I find the same thing. I find if I’m a little apprehensive or nervous or fearful about something, it’s usually a good indicator.

Segel: Yeah, because you’re going to walk into someplace and find out your limits. I think that’s really exciting. By the end of that movie to feel like I didn’t butt up against the wall of what I’m capable of it really made me feel capable.

Cranston: It’s a beautiful film by the way, and it’s a sweet revealing expose about this man who, there was loneliness to him, there was a sense of a lost boy at times. I felt so empathetic toward him.

Segel: I feel like it’s a very human thing. You may be less neurotic than I am.

Cranston: Oh by far, by far.

Segel: Yeah, I gathered. It deals with this interesting moment where what happens when everybody loves what you do. You get everything you dreamed of and you still feel the same. It didn’t affect the thing that you always thought it would affect. I really related to that.

Cranston: So with David it was that he wrote this beautiful book and he felt that the attention that came to him was uncomfortable.

Segel: You get something that’s so massive out of you, it’s seven years of writing, it’s a thousand-plus pages, you produce it and you can hold it and you put it out in the world and it didn’t affect the thing in him he thought it would affect.

Cranston: Which was what?

Segel: Maybe a feeling of everything’s OK. I can relax now. Maybe I’ll sit. You know, you do a movie and a question you’re asked on the press junket is, “What’s next.” If you write a thousand-plus page book that is everything and you get the question “What’s next,” that’s pretty terrifying.

Cranston: It’s really interesting how the public focuses on that, everyone does. They’ll ask a couple who just had a baby, “You gonna have another one?” Did you see how young this one is?

Segel: What do you think that is? Short attention span?

Cranston: I don’t know. As if they are so forward in their thinking as opposed to being in the moment. Being there and recognizing what you are experiencing with a new child.

Segel: You know what maybe it is? That you as the experiencer it is very visceral, you’re feeling all the things, and the other people are trying to use empathy but they don’t feel the things you feel.

Cranston: I like that. I want to be an experiencer.

Segel: It’s tricky though. I danced down Hollywood Boulevard with the Muppets. That theoretically should do it. It’s like the cartoonishly best moment of your life. It lasted a couple weeks and then you’re thinking, what’s next?

Cranston: I think it should be that way. These moments are ephemeral and you shouldn’t try to hold on to it or re-create it. I remember Woody Allen doing “Annie Hall” with Diane Keaton and they have this spontaneous moment with the lobster and it gets out and it creates this wonderful moment in their relationship. In order to recapture that he tries to set that up on the new date and she’s like, “What are you doing?” It’s such a great reminder that we have to be in the moment and experience this and then be smart enough to let it go.

Segel: That’s some advanced level Buddha-type stuff. I hope I get there. I’m much better than I was 10 years ago.

Cranston: When you’re doing your show, which I was able to guest star on …

Segel: Yes. You were on “How I Met Your Mother,” and now here we are.

Cranston: Were you able to then say, “I truly enjoy this moment, these people. We’re inexorably tied and that’s great and now it’s over time to move on.” Were you able to do that and move on?

Segel: It’s a very interesting question. I got “HIMYM” when I was 24. These are pretty formative years and I think you spend your 20s trying to get somewhere. I’m on the road to there. David Foster Wallace deals with this a bit in “Infinite Jest” and in the movie, you have this realization that there is no there. This imaginary there keeps moving away from you. What I realized three or four years ago was I needed to find a model that was sustainable where I wasn’t constantly feeling like I hadn’t arrived yet. Like you said, being present for each moment.