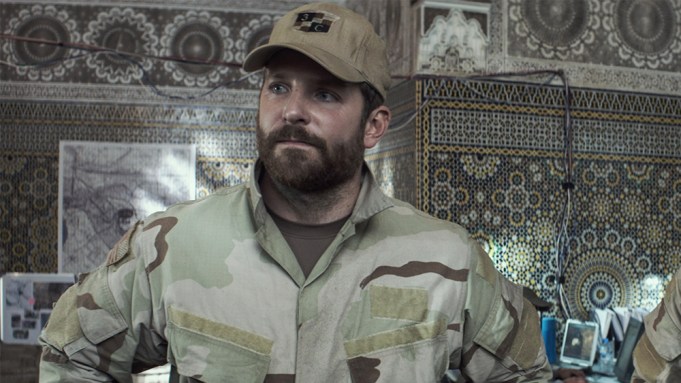 After a record-breaking wide-release debut over the Martin Luther King holiday, “American Sniper” will loom large at the box office for the second weekend in a row.

Analysts didn’t see Clint Eastwood’s look at the life of Navy SEAL Chris Kyle coming, so it’s hard to figure out just how massive the film will continue to be now that it faces off against new projects from Jennifer Lopez and Johnny Depp.

If “American Sniper” has a sophomore weekend drop-off like the kind of traditional summer blockbuster it mirrored when it kicked off with $107 million and change over the four-day period, it should pull in roughly $45 million. In a sign of its dominance, “American Sniper” will have the biggest second weekend of any January wide release in Fandango history.

“We’re in uncharted territory,” said Phil Contrino, VP and chief analyst at BoxOffice.com. “I don’t think it’s going to have a huge decline, but there’s a big range for where it could end up.”

With “American Sniper” sucking up most of the air at the multiplexes, the trio of new releases hitting theaters will struggle to carve out some breathing room. The new entrants include “The Boy Next Door” with Lopez, crime caper “Mortdecai” with Depp, and family pic “Strange Magic.”

Of these, “The Boy Next Door” looks best positioned to perform, and should bring in between $12 million to $15 million when it debuts at 2,599 North American theaters. The thriller was produced by Universal and Blumhouse Productions for $4 million. Despite the low pricetag, the partners nabbed a big name in Lopez that should help the picture appeal to Latino audiences and females.

Based on a series of 1970s comic novels, “Mortdecai” boasts a bigger star in Depp, but appears to be having more trouble elbowing aside “American Sniper.” The Lionsgate and OddLot Entertainment release should pull in between $10 million to $12 million when it bows in 2,648 locations. It carries a $60 million production budget. The roguish art dealer at the center of the caper film represents another quirky role for Depp, but audiences appear to be growing tired of his outlandish costumes and accents. He’s coming off a punishing string of financial disappointments such as “The Lone Ranger, “Transcendence” and “Dark Shadows” and “Mortdecai” looks unlikely to restore his box office luster.

That leaves “Strange Magic” to jockey with “Paddington” for family business. “Strange Magic” is a computer-animated film about goblins and elves produced by Lucasfilm and Lucasfilm Animation and distributed by the Walt Disney Company.

“Paddington,” the film version of the children’s books about a talking bear, will hold up well in its second weekend, pulling in $13 million.