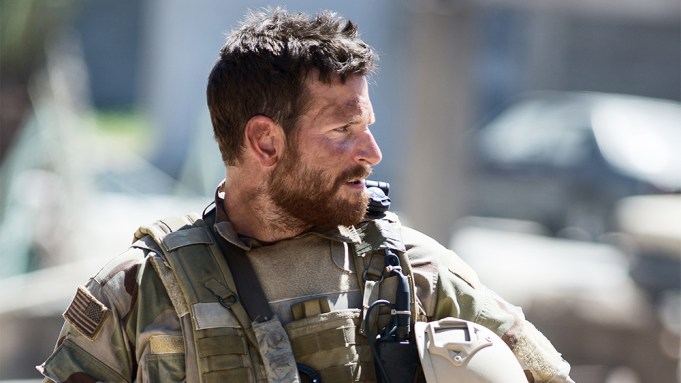 “American Sniper” hit the bullseye, earning an astonishing $90.2 million in its debut weekend in wide release.

It is now on pace to upend records for the Martin Luther King holiday and for the month of January, pulling in roughly $105 million over the four-day period. It’s also a new high-water mark for director Clint Eastwood, whose previous weekend record was the $29.5 million wide release opening for 2008’s “Gran Torino.” At 84, he’s still got it.

“The movie has become a cultural phenomenon,” said Dan Fellman, Warner Bros. head of domestic distribution. “It tore apart the record book and not by a little. By an enormous amount.”

“American Sniper” recently picked up Oscar nods for best picture and best actor for star Bradley Cooper, and the awards buzz only intensified interest in the film. The war drama was co-produced and co-financed by Village Roadshow for less than $60 million. Early projections had pegged a wide release debut in the $40 million range.

What was amazing about “American Sniper’s” performance is that, despite dealing with the unpopular Iraq War and such depressing topics as post-traumatic stress disorder, it put up numbers similar to a blockbuster summer release.

Analysts likened the reception to “Guardians of the Galaxy,” which shattered expectations last summer in part because of the endorsements it received on social media platforms. By debuting in a handful of theaters on Christmas, “American Sniper” was able to build support organically.

“This is unprecedented,” said Phil Contrino, vice president and chief analyst at BoxOffice.com. “In the climate we live in, word-of-mouth can push a movie really far, really fast.”

“American Sniper” also benefited from its 332 Imax screenings, where it is expected to generate $11.5 million for the four-day weekend and enjoyed the format’s biggest ever R-rated opening. In premium large formats, the war drama made $9.7 million for the weekend.

“American Sniper” wasn’t the only record breaker. Sony and Screen Gems’ “The Wedding Ringer,” starring Kevin Hart as a best man for hire, now ranks as the No. 1 R-rated comedy opening for the month of January.

The film earned $21 million for the weekend and should pick up $25 million for the four-day holiday. Those numbers are good news for a film that cost an economical $23 million to produce. It also keeps Hart’s box office roll going, following his success in recent hits such as “Ride Along” and “Think Like a Man.”

“Kevin Hart really is that guy that everybody wants to hang with,” said Rory Bruer, Sony Pictures president of worldwide distribution. “Not only is he always funny, but he’s that guy that you want to sit down and have a beer with. He exudes charisma.”

Bruer said he was pleased that the film didn’t get swept aside by “American Sniper,” particularly because both pictures are R-rated.

“It’s a victory for the ‘The Wedding Ringer’ this weekend with this R-rated juggernaut in the marketplace,” he added.

The Weinstein Co.’s “Paddington” opened to $19.3 million from 3,303 screens for the weekend and a third-place finish. By Monday, however, it could supplant “The Wedding Ringer” as the holiday’s second highest-grossing film as it is also expected to earn roughly $25 million over the four-day period. The Weinstein Company picked up U.S. distribution rights from StudioCanal, which financed the $55 million adaptation of Michael Bond’s beloved series about a talking bear with a penchant for marmalade sandwiches.

The film is set up nicely when it comes to competition for the family dollar. It has the market more or less to itself until “The SpongeBob Movie: Sponge Out of Water” debuts on Feb. 6.

“The parents like it just as much as the kids and getting some adult business is always a good sign with films like this,” said Erik Lomis, distribution chief for The Weinstein Company.

“American Sniper’s” success was bad news for the weekend’s other adult drama, “Blackhat.” Michael Mann’s look at the way we hack now with Chris Hemsworth trading in Thor’s hammer for a keyboard, flopped. It earned a doleful $4 million from 2,567 locations for the weekend and should make $4.6 million over the holiday. That’s a dreadful result for the $70 million production and the worst of Mann’s career. It’s lower even than the modest $10 million the studio projected “Blackhat” would pull in over the four-day period.

Legendary Pictures backed the film, with Universal distributing. The filmmakers will now look abroad in order to stem some of that red ink.

“We wish the film would have found a bigger audience,” said Nick Carpou, Universal’s president of domestic distribution. “We think, based on the director and Chris Hemsworth, that it’s got strong international appeal.”

The top five was rounded out by holdovers, “Taken 3” and “Selma.” Liam Neeson’s latest vigilante flick fell sharply in its sophomore frame, dropping more than 60% to earn $14 million over the weekend and bringing its total to $62.8 million.

Despite being snubbed in several major Oscar categories, Paramount Pictures’ “Selma” capitalized on the Martin Luther King holiday, earning $8.3 million. It should earn $10.3 million over the four-day period. The Civil Rights drama has made nearly $28 million since premiering in limited release on Christmas.

Among Oscar contenders, “The Imitation Game” benefited from its eight nominations, earning $7.2 million and bringing its total to more than $50 million. It will expand from 1,611 locations to more than 2,500 next weekend. The Weinstein Company, which is distributing the film, says the biopic of code-breaker Alan Turing is performing better than “The King’s Speech” did at a similar point in its release schedule. A gross of $100 million or more seems possible.

In limited release, “Still Alice” sought to capitalize on Julianne Moore’s recent Golden Globe win for best actress. The film debuted on 12 screens after having a brief Oscar qualifying run last winter. The drama about a college professor with Alzheimer’s disease earned $212,432, for a per screen average of $17,703.

The success of “American Sniper” helped push the holiday weekend to new highs, lifting the overall box office up more than 13% over last year’s numbers. This year is expected to shatter records thanks to sequels to films such as “Star Wars” and “The Avengers,” and, it would seem, a gritty war drama from Clint Eastwood.

“What a great way to kick off the box office,” said Paul Dergarabedian, senior media analyst at Rentrak. “If this is going to end up as the first $11 billion year in history, it’s going to be because of weekends like this and unexpected performances like ‘American Sniper.'”