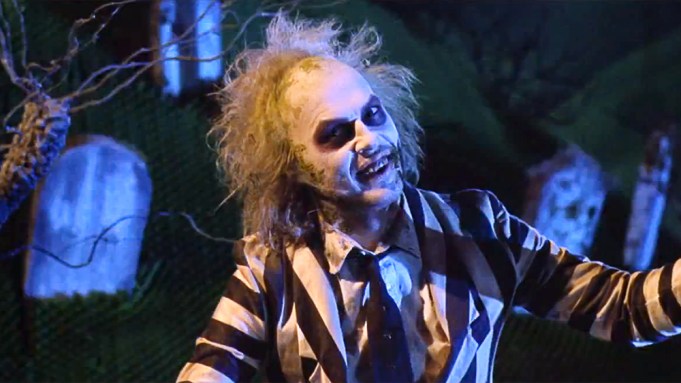 More than 27 years ago, Winona Ryder danced in the air to Harry Belafonte as the ending credits rolled in Tim Burton’s “Beetlejuice.” Finally, fans of the cult classic will be able to see what happens next for “the ghost with the most” and his cohorts, Ryder said during a visit to “Late Night With Seth Meyers” Monday.

“I think I can confirm it,” started Ryder. “It was very hush-hush top secret … but then (Tim Burton) was doing some press for ‘Big Eyes’ and and he did an on-camera interview and he said, ‘Oh yeah, we’re doing it, and Winona’s going to be in it.’ … If he said it, I can say it.”

That’s all the information that we’re going to get out of Ryder, who later said, “I really don’t know much more than anybody.”

While Warner Bros. has yet to officially greenlight the sequel, Burton appeared pretty confident last December, disclosing that he and star Michael Keaton had discussed the long-anticipated follow-up. “There’s only one Beetlejuice, and that’s Michael. There is a script, and I would love to work with him again. I think there is now a better chance than ever… I miss that character. There’s something that’s cathartic and amazing about it. I think it’s closer than ever.”

Ryder also shared with host Meyers that she is still summoned to say the title character’s name multiple times by fans in the TSA every time she goes to the airport. “I have not been let through security unless I said (Beetlejuice),” she admitted with a laugh.

With “Beetlejuice” finally appearing onscreen again, the actress said that she is “very superstitious” and won’t risk saying the word another three times.