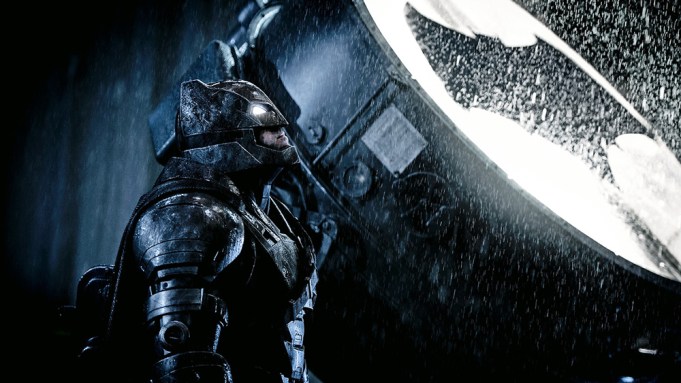 A new “Batman v Superman: Dawn of Justice” teaser trailer debuted during the midseason finale of Fox’s “Gotham,” and the intense new scene showed a powerful confrontation between Ben Affleck’s Dark Knight and Henry Cavill’s Man of Steel — all without a punch being thrown.

In the 30 second spot, a bound Batman is held captive in some kind of desert bunker, before Superman flies in, strides up to the hero and pulls off his mask, revealing Affleck’s Bruce Wayne.

Affleck admitted that he was drawn to the role of the iconic hero because “Batman v Superman” will provide a version of the Caped Crusader that we haven’t seen before — “This older, more broken, kind of f—ed up Batman … We have seen that Batman is willing to cross the line to protect people. That vigilantism has been a part of his character all along, and we are tapping into that mentality when faced by something as potentially as deadly as Superman.”

Director Zack Snyder describes Batman as having “a crisis of conscience” in the new film. “We want to assume that Batman has reached this point in his life and career as a superhero, and Superman represents a sort of philosophical change. He is a paradigm shift for Batman: ‘I’ve been fighting criminals all my life, trying to find justice, and now I am confronted with a concept that is transcendent to me.’ In the face of Superman, a man robbing a bank doesn’t matter.”

The new trailer for the hotly anticipated Warner Bros. superhero sequel will debut on “Jimmy Kimmel Live” on Wednesday, Dec. 2. Kimmel has been scoring a number of cinematic coups of late — last week, Robert Downey Jr. and Chris Evans debuted the teaser trailer for “Captain America: Civil War” on the show. The first full “Batman v Superman” trailer debuted in April after being leaked online.

Snyder directed “Batman v Superman” from Chris Terrio’s script, based on a story by Snyder and David S. Goyer.