Top Animators on Working With Actors and the Value of Teamwork 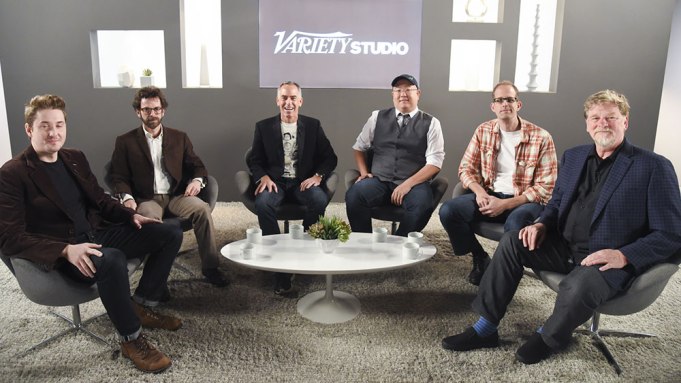 The visionaries from five animated awards contenders weigh in with insights on what goes into what gets onscreen and the value of teamwork.

Charlie Kaufman, “Anomalisa”: “I think with stop motion, the imperfections are built into the process, which is different than computer stuff, because you know you’ve got the chatter and you can feel the animators and there’s a fragility that comes with that, (which) I really like, and we tried to keep. We didn’t try to clean that stuff up, so you can see the fabric moving, you can see the hair moving, and a lot of times I think in stop motion they do clean it up so you can’t really tell that it’s stop motion. But we liked the way it looked so we kept it.”

Peter Sohn, “The Good Dinosaur”: “There is a very specific type of person that gets into animation. I feel like it’s always that first beginning of learning to draw something or making something move and it’s a very, very kind of personal, close-the-doors, don’t-bother-me kind of personality. And the patience it takes to go frame by frame and work that out … for me, coming out of school and then coming to California and meeting all these other people … there was a definite feeling of this is my tribe.”

Steve Martino, “The Peanuts Movie”: “I love those surprises. When somebody brings in a shot in really rough form, but there’s an idea that I didn’t anticipate or think of, and it just all of a sudden pops on the screen, and you’re like — my gosh — you know, that is the real fun of collaborative art making, where you get to see other people bring their skills and talents to what you’re doing.”

Roger Allers, “The Prophet”: “You know, we’re not auteurs right? It’s like this great jam, this jazz performance where people keep adding different notes and then all of a sudden it adds to another texture and you build on it, you build, you can build themes even on top of individual performances. I think in one way maybe that’s what keeps us all humble, as animation directors, is because it’s so collaborative.”

Pete Docter, “Inside Out”: “I think nothing happens by accident. You don’t have any sort of happy accidents. Everything has to be designed and built and intentionally put there. There’s this sort of spontaneity you have to create. Which kind of stinks, because it’s nice when you have an energy and a vibrancy that comes out of collaboration. … Computer animation can do perfect stuff really easily. And so we work really hard to scuff things up and make little dents. You spend so much time making things wrong.”