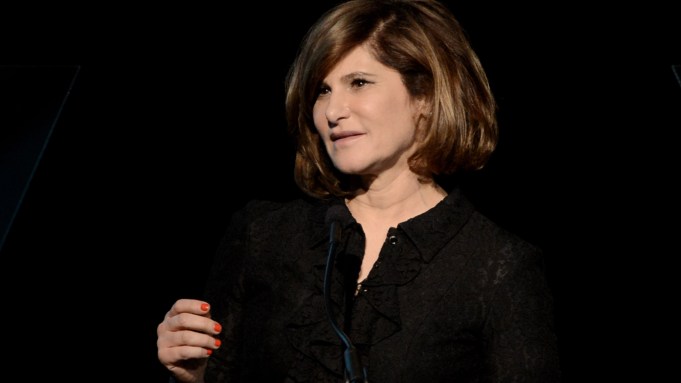 Six days after stepping down as co-chairman of Sony Pictures Entertainment, Amy Pascal broke her silence on Wednesday at the Women in the World conference in San Francisco during a candid interview with journalist Tina Brown.

“All the women here are doing incredible things in this world. All I did was get fired,” she said, according to the Recode site.

Among the topics discussed were the hacked emails between herself and producer Scott Rudin, the poor reviews for “The Interview” and Hollywood’s pervasive gender gap.

Pascal recounted the moment in November when she realized that her emails at Sony would be exposed.

“I ran this company and I had to worry about everybody who was really scared…People were really scared…But nagging in the back of my mind, I kept calling (the IT department) and being like, ‘They don’t have our emails, tell me they don’t have our emails,’” she said. “But then they did. That was a bad moment. And you know what you write in emails.”

Right off the bat, Brown queried Pascal on the racial emails between her and producer Scott Rudin about President Obama, causing the 56-year-old exec to shake her head.

“It was horrible. That was horrible,” Pascal said. “As a woman, what I did was control how everybody felt about themselves and about me…and there was this horrible moment when I realized there was absolutely nothing I could do about whether I’d hurt people, whether I’d betrayed people.”

"All these amazing women siting in this chair and all I did was get fired!" ~ Amy Pascal #WomeninWorldSF pic.twitter.com/yNk1t4rbf1

Pascal also said, “There is nothing you can do. You can’t say anything. You can’t explain anything. It’s just there.”

As for her exchanges on Jolie, who Rudin called a “minimally talented spoiled brat,” she said: “Angie didn’t care.”

“Everybody understood because we all live in this weird thing called Hollywood,” she said. “If we were all actually were nice, it wouldn’t work.”

When asked about paying Jennifer Lawrence less than her male co-stars in “American Hustle,” Pascal scoffed.

“I’ve paid (Lawrence) a lot more money since then, I promise you…Here’s the problem: I run a business. People want to work for less money, I pay them less money…Women shouldn’t be so grateful. Know what you’re worth. Walk away.”

Brown later said that “The Interview” was a pretty bad movie, to which Pascal replied, “You don’t get to choose what you stand up for.”

This past week, Sony Pictures Entertainment announced a partnership to make new Spider-Man movies with Marvel Studios, which Pascal will produce as part of her new studio deal with Sony.

“The worst thing you can do is be on the sideline,” she said.

“It’s about time we have a female action series,” Pascal declared.

As for the most important thing she learned from the hacked emails? “Say exactly what you think directly to people all the time,” she said. “In the moment, the first time.”

When Brown countered that Hollywood stars were sensitive than most people, Pascal snickered.

“They’re bottomless pits of need. You’ve never seen anything like it,” she said. Then added sarcastically: “They are so great. They’re this magical thing that no one else can be. They’re filled with the need to be loved … but that’s because they’re magical.”

The executive also had harsh words for the press when asked if she was surprised about the reaction to her emails.

“I’m not supposed to say anything about that,” she said. “But I will say that I was. People found reasons that going through my trash and printing it was an ok thing to do. They found a way to justify that. And they have to live with that.”