10 Reasons ‘Kung Fury’ Was the Most Awesome Project in Cannes 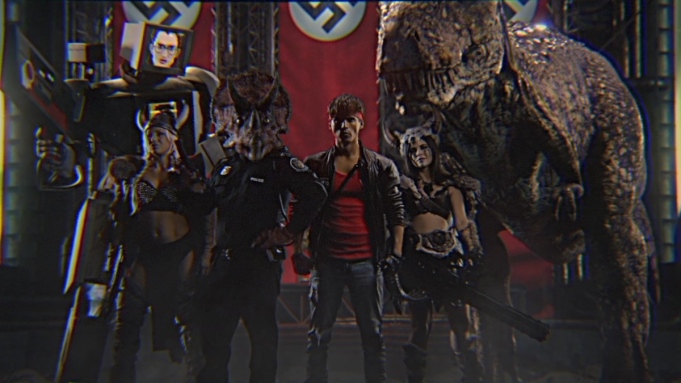 While the attention of most Cannes journalists was fixed on George Miller’s adrenaline-rush “Mad Max: Fury Road,” or trying to make sense of the fight sequences in Hou Hsiao-Hsien’s “The Assassin” (where rivals dance around a bit, bow and then walk off into the woods), a select group of people were having their minds blown by “Kung Fury,” a 30-minute homage to all things ’80s — from Chuck Norris to Cannon films, “Street Fighter” graphics to its synthesizer pop score. After premiering last Friday in Directors’ Fortnight at Cannes, the short hits YouTube this Thursday, and the world will never be the same. Here’s 10 reasons why:

1. It Takes a Foreigner to Truly Appreciate the Insanity of American ’80s Entertainment
Writer-director David Sandberg was born in Sweden. “My family didn’t have cable when I grew up, so I missed out on a lot on the great television shows from the ’80s,” he says. “I used to go to my friends’ houses and record episodes of ‘Teenage Mutant Ninja Turtles’ and ‘Thundercats’ onto VHS tapes so I could watch them later.” Though it follows in the tradition of retro satires “Black Dynamite” and “Machete,” “Kung Fury” is more than just a hilarious pastiche of all those insane ’80s shows. It’s also a loving homage to the era when the B movie became America’s greatest export: When English-as-second-language stars — like Arnold Schwarzenegger, Jean-Claude Van Damme and Sylvester Stallone (granted, Rocky wasn’t born abroad, but he sure sounds like it) — dropped catchphrases instead of dialogue, making it easy for foreigners to follow movies where exploding cars and martial-arts action served as the main attraction.

2. It’s the Ultimate Calling Card for a Visual Effects Talent
By the time he was 17, Sandberg knew he wanted to make the kind of movies that had enthralled him as a kid, so he taught himself to be a 3D animator. That opened the door to professional work as a visual effects artist, which in turn led to directing jobs on commercials and music videos. Using the money he’d made from such for-hire projects, Sandberg — operating under his “Laser Unicorns” banner — decided to tackle the most insane idea he could think of: The world’s top crime-fighter, a cop named Kung Fury, travels back in time to take on history’s ultimate super-villain, the “Kung Fuhrer” himself, Adolf Hitler.

3. Filled With More Crazy Ideas Than Most Features
Since it was designed to serve as a showcase of sorts, “Kung Fury” explodes with gonzo ideas. Featuring retro gadgets (including a Nintendo Power Glove and brick-size cellphones), dino-riding Viking babes, a “He-Man”-style animated sequence and a massive showdown in Hitler’s bunker, “This project has been like a playground for me to take ideas that I’ve learned and apply them in all sorts of different ways,” Sandberg explains. If there was something he couldn’t pull off, Sandberg problem-solved around it, using the faux VHS filter — complete with tracking artifacts and the red/green color shift — to compress the action and mask the more egregious side effects of shooting on greenscreen.

4. It’s the Ultimate Do-It-Yourself Project
Can’t afford an actual ’80s star to play the lead role? Cast yourself! Since “Kung Fury” is designed as a spoof of the low-budget exploitation fodder Hollywood churned out in the ’80s, bad acting becomes part of the joke — not that Sandberg is really all that terrible. The Swedish helmer looks a bit like a young Ralph Macchio, complete with clenched jaw and “Karate Kid”-style headband, and his stiff, gravel-voiced delivery hilariously suggests Christian Bale’s Batman.

5. Boasts Better Action Than Five Steven Seagal Movies
Sandberg doesn’t actually know kung fu, but that wasn’t a problem. Originally, the idea was to do all the fighting virtually, digitally replacing his legs in post-production. When that looked silly, he decided to hire a body double, who does all the fighting in the short’s centerpiece scene: a two-minute showdown against dozens of Nazi stormtroopers (technically, one guy, digitally repeated as many times as needed). Like so many of the gags in “Kung Fury,” this one works on multiple levels, referencing both the “Old Boy” hallway fight sequence and old-school side-scrolling video games, complete with a “Mortal Kombat” finishing move, where he rips off a Nazi’s head, spinal column still intact.

6. It Co-Stars “SNL’s” Jorma Taccone … as Hitler!
Initially, Sandberg thought he could afford to finance the project himself, but when the money ran out, he started selling off his possessions — his couch, his television — to finish the job. Then he turned to Kickstarter, where a trailer featuring the footage he’d already shot became a viral sensation. Funds poured in from around the world, along with fan letters from people eager to collaborate (14,000 in the first week). He heard from musical comedy trio the Lonely Island, who volunteered their help (Sandberg took them up on the offer, casting Jorma Taccone as Hitler). WME agent Simon Faber signed Sandberg and flew him out to L.A. to meet with various production companies.

7. There’s a Feature Version on the Way
During Sandberg’s trip to Hollywood, he took meetings all over town to pitch a feature version of the project. He hit it off with David Katzenberg and Seth Grahame-Smith of KatzSmith Productions, who shared his obsession with all things ’80s (they’re also prepping remakes of “It” and “Beetlejuice”) and paired him with Tyler Burton Smith, an American video game scribe based in Finland. Sandberg and Smith met up, fleshed out a longer version of the story that allowed for more robust action, actual character development and some much-needed breathing room between gags. “It would be a clean slate, so we would reshoot everything from scratch,” explains Sandberg, who arrived in Cannes with the script ready to show to potential partners.

8. David Hasselhoff Recorded a Music Video to Hype It
Figuring he had nothing to lose, Sandberg reached out to one of his favorite ’80s icons. “I had a scene in mind with David Hasselhoff, but I thought it was never going to happen.” He sent an email to Hasselhoff’s agent anyway. “David saw the first 15 seconds of the trailer, and he said, ‘I’m in.’” The “Knight Rider” star then flew to Sweden to shoot the “True Survivor” music video. (Swedish electronic music phenom Mitch Murder recorded the rest of the short’s retro-flavored soundtrack.) Hasselhoff also makes a cameo as the onboard computer for Kung Fury’s Lamborghini: “Didn’t anyone ever tell you not to hassle the HOFF-9000?”

10. “Triceracop” — What More Could You Ask For?
After Kung Fury’s first partner is killed in the line of fire, his captain assigns him a crudely animated, yet endearing replacement, “Triceracop” — played by an actor with tracking markers covering his face, over which Sandberg superimposed a giant dinosaur head. “Originally, Triceracop was just a pun I liked, but what surprised me in Cannes was that he was clearly the audience’s favorite,” Sandberg explains. “Cannes was the first time ever that I’ve watched a movie that I made together with an audience.” For the first five or 10 minutes, you couldn’t even hear the movie because they kept spontaneously applauding and laughing.”