Cary Joji Fukunaga's adaptation of Uzodinma Iweala's 2005 novel is an artful, accomplished yet not entirely sustained portrait of an African child soldier. 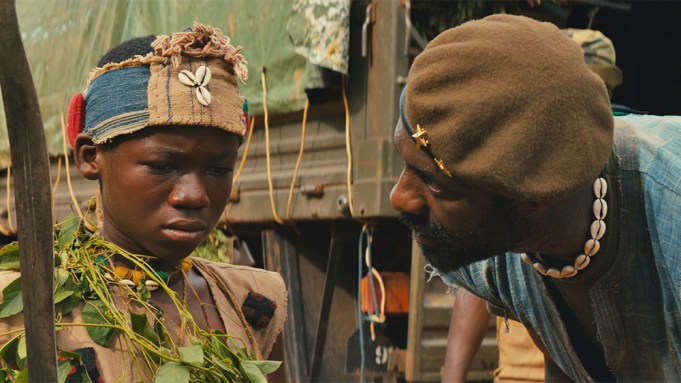 The unsentimental education of an African child soldier is captured with savage beauty and matter-of-fact horror in “Beasts of No Nation,” a tough-minded, tough-viewing chronicle of a civil war as seen through the eyes of one of its youngest casualties. Having moved with growing confidence from a slick Mexican gangland saga (“Sin nombre”) to a tony Victorian lit adaptation (“Jane Eyre”) to a crackerjack American crime serial (season one of “True Detective”), writer-director Cary Joji Fukunaga pulls off another chameleonlike turn with this artful, accomplished but not entirely sustained adaptation of Uzodinma Iweala’s 2005 debut novel, never quite finding an ideal cinematic equivalent for the singular spareness and ferocity of the author’s prose. By turns lucid and a bit logy, and undeniably overlong, it’s nevertheless the rare American movie to enter a distant land and emerge with a sense of lived-in human experience rather than a well-meaning Third World postcard. As such, its aesthetic integrity won’t make its grueling subject matter an easier sell to the mainstream.

Following its festival premieres at Venice, Telluride and Toronto, Fukunaga’s long-gestating passion project will prove a significant test of Netflix’s arthouse reach and marketing savvy when it rolls out Oct. 16 via the company’s streaming service, simultaneous with its limited theatrical release through Bleecker Street Media. Still, it’s unclear if the relative ease of on-demand viewing will offset the challenge of a starkly violent 136-minute war drama with no recognizable cast names except Idris Elba, providing a lone burst of star wattage in a context that could otherwise scarcely feel more harrowingly grounded in reality. With its high-profile pedigree and mostly English dialogue, “Beasts of No Nation” may be more accessible than recent child-soldier dramas like Jean-Stephane Sauvaire’s “Johnny Mad Dog” (2008), Noaz Deshe’s “White Shadow” (2014) and Kim Nguyen’s Oscar-nominated “War Witch” (2012), but it’s no more likely to win over the faint of heart.

This is, after all, the story of Agu (Ghanaian actor Abraham Attah), a young boy from an unnamed African country who finds himself orphaned amid a sudden outbreak of violence, then swiftly adopted by a warlord known as the Commandant (Elba), who trains him to be a guerrilla fighter in a conflict he’s barely old enough to comprehend. In the novel, which wove together scenes from Agu’s brutal new life with memories of happier days at home with his family, Iweala wrote in a poetically primitive first-person voice that gave even the flashbacks a present-tense urgency; it was a stream-of-consciousness thriller in which the boy’s half-formed insights and ideas erupted with convulsive force on the page. “I am not bad boy. I am soldier and soldier is not bad if he is killing,” Agu notes early on, capturing a world of moral confusion in one piercing line.

Fukunaga has retained many of the story’s particulars but reshuffled them into a more straightforward linear narrative, which begins with a warm, joyous portrait of Agu’s early childhood. We see him making mischief with his friends, pranking his older brother (Francis Weddey), and being a good if rascally son to his God-fearing mother (Ama K. Abebrese) and schoolteacher father (Kobina Amissah Sam). But everything changes as military tanks roll into their village and a reign of terror begins, tearing families apart and forcing everyone to flee. In a scene of overwhelming chaos and panic, Agu is abruptly separated from his mother and little sister (Vera Nyarkoah Antwi), and before long his father and his brother have left him as well, gunned down in a surge of carnage that is senseless and sudden, but not inexplicable. One of the key lessons of “Beasts of No Nation” is that all violence, however ghastly, has a point of origin.

Before long, Agu will find himself clad in makeshift fatigues, wielding a machete, and inflicting his own horrors as a member of a rebel army. Their leader, the Commandant, is a fiery seducer of minds and souls who incites his young conscripts to commit horrific acts of slaughter in the name of revenge. When he orders Agu to perform an initiation killing, he claims the victim-to-be was responsible for the death of the boy’s father — a lie that convinces no one, least of all Agu himself, but which provides a flimsy pretext for the grim, blood-spattered scene that follows. Words, more than rifles or machetes, turn out to be the Commandant’s weapon of choice: Barking and cajoling, he whips his young warriors into action with furious war rhetoric, even as he tries to lull them into a sense of familial camaraderie. By recasting himself as a sort of surrogate father figure, he can not only displace the memory of their parents, but also exploit it for his own murderous ends.

Elba hasn’t had a big-screen part this substantial since he was cast as a very different kind of African leader in “Mandela: Long Walk to Freedom” (2013), and in his skillfully underplayed performance, the Commandant emerges as both a charismatic villain in the grand Hollywood tradition and a persuasive product of his environment. Notably, while Fukunaga captures the insidious intimacy of the bond that develops between the Commandant and Agu, he omits the novel’s explicit scenes of the warlord sexually abusing his young charges, perhaps aware that this is one act of brutality that might exceed the limits of the audience’s tolerance. Despite a shaky third act that loses considerable narrative steam, the film ultimately conjures a measure of pathos for the Commandant following a tense meeting with his own superior (Jude Akuwudike), in which these puffed-up alpha males reveal themselves to be just two more cogs in the rumbling machinery of war.

Fukunaga, whose work on “Jane Eyre” and “True Detective” cemented his reputation as one of the more gifted visual stylists of his filmmaking generation, brings the same level of artistry to bear on “Beasts,” which marks the first time he’s served as his own feature cinematographer. Shooting the richly varied landscapes of coastal Ghana in striking widescreen compositions that move from dust-choked village roads to verdant jungles to cleansing ocean tides, he draws us into a realm whose natural beauty feels at times like a provocation next to the sheer ugliness of what he shows us. The film’s richly immersive sense of local atmosphere is further aided by rich contributions from production designer Inbal Weinberg and costume designer Jenny Eagan, nailing the colorful, far-from-uniform dress code of the Commandant’s motley militia.

Yet while Fukunaga creates Agu’s world with an extraordinary attentiveness to detail, he hasn’t quite found a way to approximate the novel’s radically childlike perspective, or to bridge the gap between this child soldier’s psyche and our own. For all the film’s unyielding focus on Agu’s journey and its reams of voiceover narration, something essential seems to have been lost in the transition from page to screen; this is a drama that’s ultimately more persuasive on a pictorial level than it is compelling on a psychological one. And although the movie’s worthy, humanist themes are all but inscribed on every frame, the manner in which they coalesce somehow feels naggingly unspecific; the film’s end-credits imperative (“Tell the world that children are not soldiers”) feels at once thoroughly laudable and somehow insufficient to the dramatic task at hand.

None of this detracts from the fine work of young Attah, who plays Agu with a grave, soulful reserve that belies the fact that this is his first-ever screen performance. The actor has haunting scenes here, including Agu’s tragic encounter with a desperate, wailing mother whom he mistakes for his own, and his scenes of quiet bonding with Strika (Emmanuel “King Kong” Nii Adom Quaye), the mute young soldier who initially recruits him and soon becomes his only real friend. “Beasts of No Nation” doesn’t make the mistake of forcing Agu and his fellow soldiers down some easy road to redemption, but it grasps that these fugitive gestures of compassion might be profound acts of moral survival.