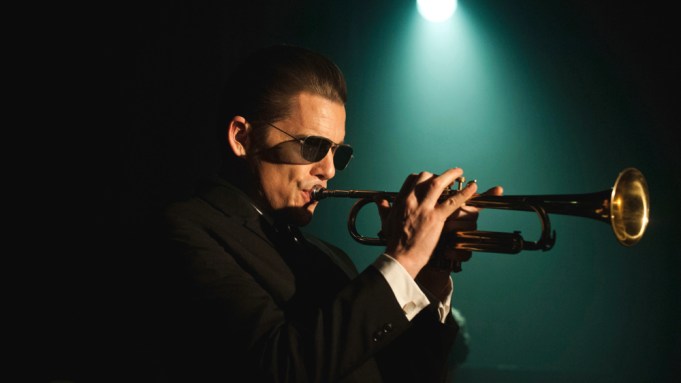 Variety has been given exclusive access to a clip from “Born to Be Blue,” which stars Ethan Hawke as jazz trumpeter Chet Baker. Oliver Simon and Daniel Baur’s K5 International will be selling the movie at the Toronto Film Festival, where it has its world premiere in Special Presentations on Sept. 13.

The film, which was written and directed by Robert Budreau, picks up Baker’s story late in his career at the end of the 1960s, when — after years of heroin abuse, financial loss, and public disgrace — he attempts to stage a comeback. After a brutal beating in a parking lot after a gig, Baker is left with injuries that threaten the revival of his fortunes.

Hawke, who was Oscar nominated earlier this year for “Boyhood,” stars alongside Carmen Ejogo, who plays his lover Jane, and Callum Keith Rennie, who is Chet’s manager and producer, Dick Bock.

The film was produced by Jennifer Jonas, Leonard Farlinger, Budreau and Jake Seal, and the production companies are New Real Films, Lumanity and ​Black Hangar Studios. The cinematographer is Steve Cosens. The Canadian distributor is Entertainment One, and Creative Artists Agency and Cinetic Media are handling U.S. rights.

Following the premiere on Sept. 13 at Toronto’s Elgin/​Winter Garden Theatres, there will be a further public screening on Sept. 14 at the Bloor Hot Docs Cinema. Press and industry screenings are on Sept. 14 and 16 at Scotiabank Theatre.