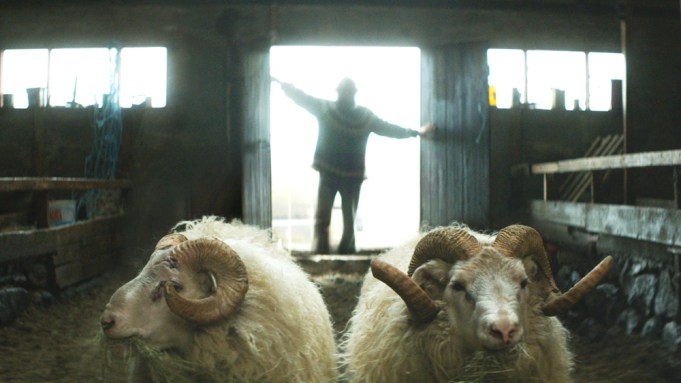 LONDON — Variety has been given exclusive access to the trailer for “Rams,” which world premieres in the Un Certain Regard section of the Cannes Film Festival. Jan Naszewski’s New Europe Film Sales is handling world sales on the Icelandic film, which is directed and written by Grimur Hakonarson.

The pic centers on two brothers living in a remote Icelandic farming valley. They haven’t spoken to each other in 40 years, but are forced to join forces in order to save what’s dearest to them — their sheep, and, in particular, their prize-winning rams. The animals are considered among the country’s best and carry an ancient lineage. When a lethal disease infects one of the brothers’ sheep, the entire valley comes under threat. The authorities decide to cull all the animals in the area to contain the outbreak. This is a near death sentence for the farmers, whose sheep are their main source of income. As the authorities close in, the brothers will need to come together to save the special breed passed down for generations, and themselves, from extinction.

Hakonarson graduated from Prague film school FAMU, and his graduate film, the short “Slavek the Shit,” was selected by the Cinefoundation section of the Cannes Film Festival in 2005, and went on to win 12 festival prizes, including the Silver Hugo at the Chicago Film Festival. His next short film, “Wrestling,” premiered at the Locarno Film Festival in 2007, and won 25 festival prizes around the world. Hakonarson’s 2010 feature film debut, comedy “Summerland,” played at several festivals, including Denmark’s CPH Pix, Norway’s Haugesund, Austin’s Fantastic Fest in the U.S., and Mill Valley, also in the U.S.