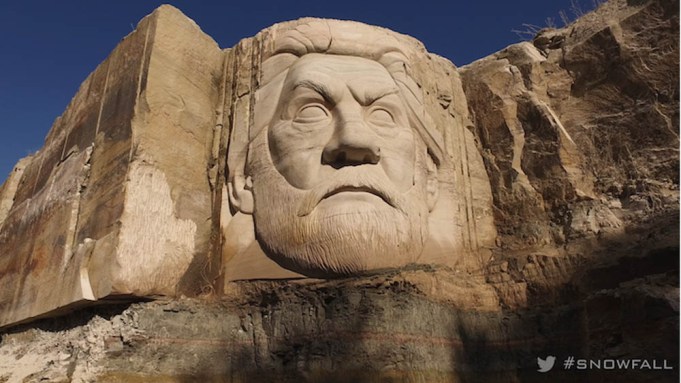 “The Hunger Games: Mockingjay — Part 2” opened in Germany last week with a boffo box office performance, and what better way to celebrate than to blow up a 30-foot high carving of tyrannical President Coriolanus Snow (sporting the unmistakable likeness of Donald Sutherland) chiseled into the face of a sandstone quarry in Bavaria?

The final installment of the post-apocalyptic film series, which partially shot in Berlin, earned an impressive €13.96 million ($14.8 million) in its first four days at the German box office, delivering the biggest opening weekend ever for Studiocanal and pistol-whipping “Spectre” off of the top spot.

To commemorate the film’s stratospheric success, Studiocanal paid tribute to Snow by having a team of sculptors hew Sutherland’s features into rock as part of a promotional social media stunt. Unlike the faces of some bygone rulers whose faces still deface once sacred mountains, the carved visage of the ruthless president of Panem did not last. “Hunger Games” fans from around the world were prompted to click on a button to speed up the progress bar to unlock footage of what Studiocanal described as a “spectacular quarry detonation.” Once enough clicks were received, Snow came tumbling down in a fittingly explosive denouement.

Push the Button to see how we blast President Snow out of the rock! #snowfall #Mockingjay https://t.co/isKyu750uj