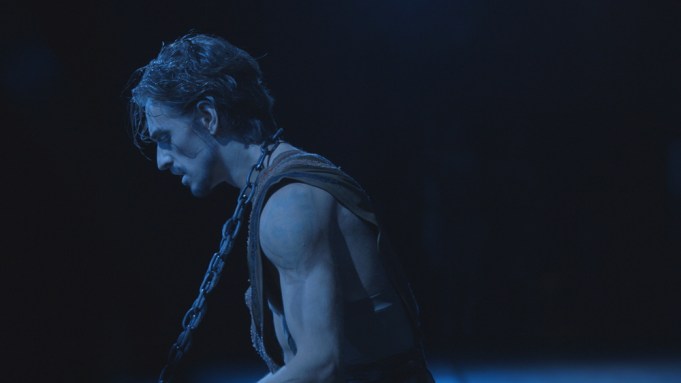 LONDON — Variety has been given exclusive access to a clip from Steven Cantor’s feature-length documentary “Dancer,” about the “bad boy of ballet,” Ukrainian dancer Sergei Polunin. Movie sales and finance company WestEnd will be showing a clip from the film to buyers at the Toronto Film Festival, which opens Thursday. Variety spoke to Polunin, who was described by the Daily Telegraph as the “James Dean of the ballet world,” and the film’s producer, Gabrielle Tana, who picked up a nomination for the best picture Oscar with “Philomena.”

“Dancer” has been a passion project for Tana since she first met Polunin in 2012, after he quit the Royal Ballet in London. “He was interested in acting so that’s what we were really talking about, and exploring possibilities for that, and then, together with friends like Julie Kavanagh, who wrote a piece about him in Intelligent Life magazine, I realized that there was an amazing human story here, and so we decided to embark on capturing it, and following him,” Tana says. “But what started out as a documentary and seeing where it went, has evolved, and changed and grown. It’s become much more about making something together (with Polunin) and more of a collaboration. And when David LaChapelle (who contributed several clips) got involved it became more exciting, and it wasn’t just about documenting a life, but about creating something.”

The film, which follows Polunin as he travels between the U.K., the U.S., Russia, and his native Ukraine, offers a different view of the dance world. “It shows a lot of what happens behind the stage,” Polunin says, but adds that the film is about much more than dance. He hopes it will show how similar people are, regardless of which country they come from. “I want to unite the different countries. I was more concerned with showing how society is, rather than just dance. I was using dance to do this,” he says. “There is a lot of stuff happening, and when I lived in London I used to watch television, and there is a lot of stuff about Russia. And when I moved to Russia there was a lot of stuff said there. There are the same kinds of people and the same culture (in both places) and I knew I was going to use this film to show that people are nice everywhere. There’s not such a big difference.” He hopes the film will combat some of the negativity surrounding international politics, with each country viewing the other in a negative light, and instead show — through his art and this film — what life is really like, “even in Siberia, where you think it is just snow.”

Earlier this year, a music video featuring Polunin dancing to Hozier’s “Take Me to Church,” which was directed by LaChapelle, went viral on YouTube, recording 12.6 million views. What was the reason for the video’s popularity? “There was a lot of emotion going on through that dance when I was doing it, so maybe people feel the emotion and the energy, and David’s vision was important as well — the way he filmed it,” Polunin says.

Polunin adds that the authenticity of the emotions displayed in the music video was important. “That cannot be faked. So maybe people like it because it is so real, and it is something positive and good.” Polunin expresses the view that there is too much negativity exhibited in a lot of films. “It is hard to make a hit with something that is beautiful, and maybe people haven’t seen that for a long time, something pure… David is a pure artist. He is an incredible artist. I haven’t met anybody like that. Through that video, he showed that he has a purity.”

The music video was supposed to be the last time Polunin danced. “I had decided to quit and the David LaChapelle piece was supposed to be my last dance,” Polunin says. “But dancing that piece, and thanks to the influence of Gabby and David, I realized that I loved dance. They are so cool and influential, and they love dance, so I was like: ‘It might be something I should come back to.”

Polunin intends to work again with LaChapelle on a new films that is in the works. “It will be really interesting; unlike anything most people have seen before,” he says. Tana also will be involved the new project, which is in development. “It’s more of a dance narrative with actors and a lot of dance. He has an idea that he is developing. It is exciting,” says Tana, who is also working on a new feature project that Ralph Fiennes is set to direct next year — Tana produced Fiennes’ first two features as a director, “Coriolanus” and “The Invisible Woman” — and several projects with Steve Coogan, with whom she produced “Philomena.”

Tana’s mother was a dancer and she herself danced until she was 17, when she realized she was “never going to be good enough,” she says. But her passion for dance has not dissipated. “I love it,” she says, adding that there is far more to be explored in the fusion of dance and filmmaking. “ ‘The Red Shoes’ is one of my favorite films of all time, and look at something like ‘Black Swan’ – it is something that really captivates people when they see it. Film is a fabulous way to show (dance) and explore it, and all we want to do is tell stories with it,” she says.

Polunin would still like to be an actor — “I am passionate about acting and theater,” he says — and sees many similarities between the way that dancers and actors express themselves. Before dancing a new role he would go to watch actors like Ralph Fiennes at the theater or watch movies starring his favorite actors, like Mickey Rourke in “Barfly,” and that would influence his performance. “Every time I am different because I pick up on an actor’s body language, and people would say ‘how do you perform your roles so differently.’”

Polunin believes he is ready to pursue a career as an actor. He is already able to express himself through body language, and is also focusing on the verbal side of the actor’s craft. (He has had the assistance of voice-coach Joan Washington, who’s worked with many leading actors, including Fiennes.) So “Dancer” is likely to be the first of many films to come.