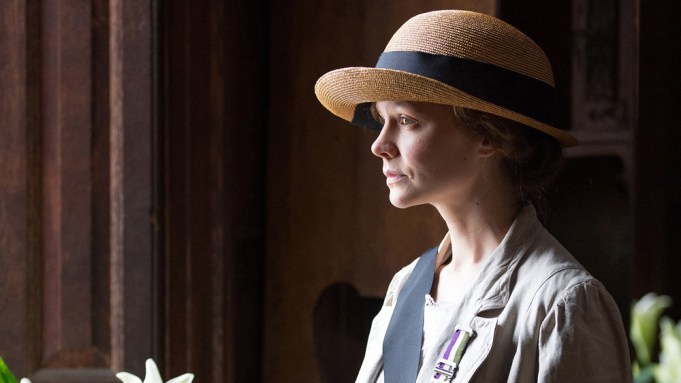 “Suffragette,” which stars Carey Mulligan, Helena Bonham Carter and Meryl Streep, will open the 59th BFI London Film Festival. The film tells the story of the ordinary British women at the turn of the last century who risked everything in the fight for equality and the right to vote.

Mulligan, Bonham Carter and Streep will be on the red carpet on Oct. 7 at the Odeon Leicester Square for the film’s European premiere, as well as other members of the cast, who include Brendan Gleeson, Anne-Marie Duff and Ben Whishaw. They will be joined by the director Sarah Gavron, who returns to the festival for a third time. She reteamed on the movie with her “Brick Lane” screenwriter Abi Morgan (“The Iron Lady”). “Suffragette” is produced by Faye Ward and Alison Owen, who produced “Saving Mr. Banks,” the festival’s closing night film in 2013.

“Suffragette” is an intense drama that tracks the story of the foot soldiers of the early feminist movement as they fought for the right to vote, women who were forced underground to pursue a dangerous game of cat-and-mouse with an increasingly brutal state. These women were not primarily from the genteel educated classes — they were working women who had seen peaceful protest achieve nothing. Radicalized and turning to violence as the only route to change, they were willing to lose everything in their fight for equality — their jobs, their homes, their children and their lives. The character of Maud, played by Mulligan, is one such foot soldier. “The story of her fight for dignity is both heart-breaking and inspirational,” the fest said in a statement.

Clare Stewart, the festival’s director, said: “‘Suffragette’ is an urgent and compelling film — made by British women, about British women who changed the course of history, and it is, quite simply, a film that everyone must see.”

Ward and Owen commented: “’Suffragette’ is a film of struggle, a film of rage, but above all a film of passion. The women in our film are British women, London women, so it feels right for us to present our film at the BFI London Film Festival. The Suffragettes would have felt very much at home here, surrounded by the energy, determination, hard work and inspiration that goes into both the festival and the films that screen here.”

It is produced by Ruby Films for Pathe, Film4 and the BFI, in association with Redgill Productions, and with the participation of Canal Plus and Cine-Cinema. Executive producers are Cameron McCracken, Tessa Ross, Rose Garnett, Nik Bower, James Schamus and Teresa Moneo. Christopher Collins was the lead executive for the BFI. Pathe UK releases the film in U.K. cinemas nationwide on Oct. 30.

The full program for the festival, which runs from Oct. 7-18, will be announced on Sept. 1.