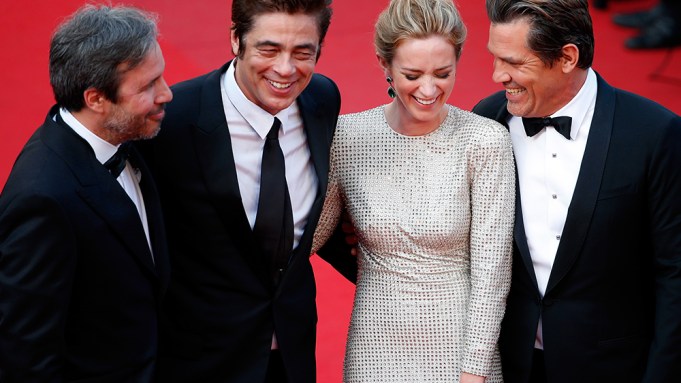 The Cannes Film Festival kicked off on Wednesday with “Standing Tall,” a French drama about a judge (Catherine Deneuve) who tries to counsel a troubled teenager.

It was only the second opening-night film in the festival’s 68-year-history directed by a woman (Emmanuelle Bercot). Girl power seemed to be a theme on and off the red carpet. At 71, Deneuve proved she’s still an international movie icon, drawing cheers as she entered the Palais, along with her co-star Benoit Magimel.

The mood on the red carpet was upbeat and festive on the warm evening, with songs from the Beatles and Pharrell Williams’ “Happy” playing the guests into the theater. Even though the festival had suggested it would be cracking down on selfies on the red carpet, many of the guests came armed with iPhones and snapped away, to the frustration of ushers who tried to push them along. Photo ops continued inside the theater as people took pictures of themselves and the crowd from their seats.

They had a lot of time on their hands, since the movie didn’t start for more than an hour. Julianne Moore took the stage to welcome everybody to Cannes, and also pick up her best actress prize from last year for “Maps to the Stars” (she had left the South of France early and not been able to attend the 2014 awards ceremony). “I’m so honored,” said Moore, who can add the award to a shelf of trophies she collected for the drama “Still Alice,” which earned her the Academy Award in February. “I never imagined I would receive a prize in Cannes.”

The pre-show was hosted by Cannes emcee Lambert Wilson, who opened the ceremony with a photo retrospective paying homage to women both in front and behind the camera. Wilson also paid tribute to the work of Fremaux, who put together an impressive exhibit on the 120th anniversary of Lumiere brothers’ invention of cinema. The lavish homage (choreographed by Portman’s husband Benjamin Millepied) saw dancers perform to classic movie clips.

The Cannes jury this year is headed by the Coen brothers, who received a standing ovation after a reel showed some of their greatest hits from “Fargo” to “No Country For Old Men.” The applause continued for jurors Jake Gyllenhaal, Sienna Miller, Xavier Dolan (the director of “Mommy”) and Guillermo del Toro. The temperature inside the theater was so hot, Spanish actress Rossy de Palma (also on the jury) fanned herself throughout the opening remarks.

For this 68th edition, which marks Pierre Lescure’s first year as president and is taking place only a few months after the Charlie Hebdo terrorist attack in Paris, artistic director Thierry Fremaux chose to open with a French social drama rather than a big-budget U.S. film, as Cannes has done in the past, in order to highlight the fest’s responsibility to show movies that reflect contemporary society.

“Standing Tall” earned a positive response from Cannes audiences, drawing a lengthy standing ovation that left the cast in tears. The film’s young star Rod Paradot is already being hailed as a rising star to watch.