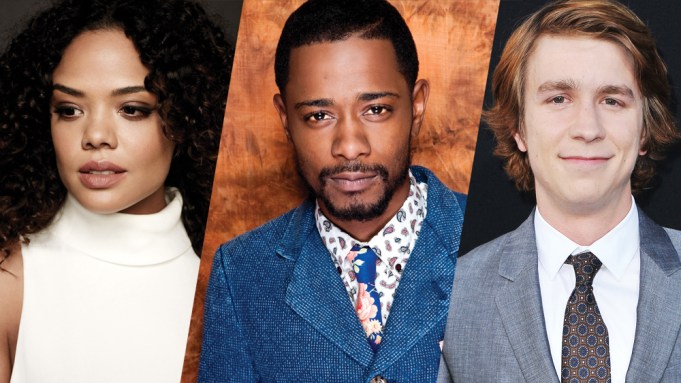 A quartet of up-and-coming actors talked about breaking in, the struggles with auditions and their most difficult roles at Variety’s annual 10 Actors to Watch panel at the Hamptons International Film Festival. Held Oct. 10 at Nick & Toni’s in East Hampton, the brunch featured actors Christopher Abbott (“James White”), Thomas Mann (“Me and Earl and the Dying Girl”), Bel Powley (“The Diary of a Teenage Girl”) and Keith Stanfield (“Selma”) and was moderated by Variety editor Jenelle Riley. Special guests in attendance included chef Bobby Flay and Oscar winner Morgan Freeman.

Asked when they first fell in love with acting, many of the actors revealed they started out doing plays in school. “I did ‘Shrek’ in sixth grade,” said Powely. “All the girls in my class auditioned for Princess Fiona, but I decided I wanted to play the donkey.” Powley added that she didn’t originally want to be an actor: “I wanted to be the Prime Minister.”

Stanfield got his break in the indie “Short Term 12,” and recalled the moment he realized the film was going to have an impact. “I had a lady who was my manager at the time and she started talking about the money she was going to take,” he said. “Then I realized it was getting real and I was utterly terrified.”

All the actors agreed the audition process feels unnatural. “I got a note at an audition once and my own ego kicked in,” Abbott recalled. “The note was, ‘He was not of this world.’ I took that as a compliment like, ‘He was out of this world.’ I soon realized it was more like, ‘We don’t know what he was doing.’”

The actors all made their breakthroughs in independent films, but are starting to move on to bigger-budget pictures. Mann is about to shoot “Kong: Skull Island” after he earned raves for the Sundance hit “Me and Earl.” He noted the difference between indies and studio films: “You try to approach the material the exact same way, but just the experience of shooting is different. It’s a much larger crew, it’s less intimate and you’ll shoot a page a day, as opposed to ‘Me and Earl,’ where you’re shooting 16 pages a day.”

Stanfield says the biggest difference between an indie like “Short Term 12” and a studio film like “Straight Outta Compton” was that “the food was good!” He added, “When I did ‘Purge: Anarchy,’ it was the first big-budget film and I walked into the trailer and was like, ‘Damn, this is better than my house!’”

When asked about their most difficult roles to date, most actors cited their most recent films. Of “Diary of a Teenage Girl,” Powley said, “It was my first leading role on screen and pretty much every other line is mine. It kind of felt like doing a play for 25 days. It was also laying everything bare, physically and mentally. I’d never been nude in a movie, never done sex scenes. We shot sex scenes for a whole week.”

Stanfield said playing Snoop Dogg in “Compton” was hard only because he found out at 10 p.m. he landed the role and was needed on set at 5 a.m. He later got to meet his alter ego. “I met him at the premiere. He was in this big cloud of smoke,” Stanfield said with a laugh. Asked what Snoop Dogg thought of his turn, Stanfield recalled, “What did he say? ‘Great job nephew, or something like that.’”