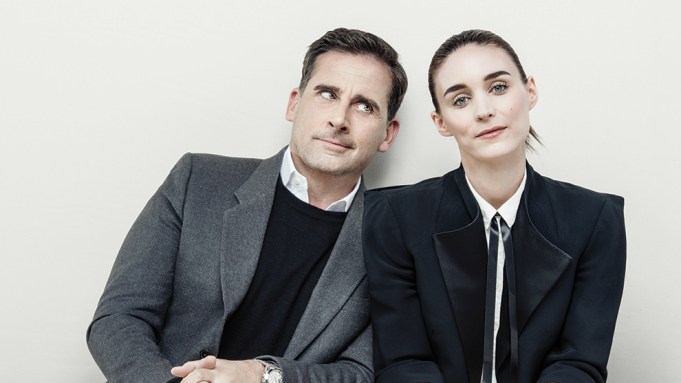 After earning Oscar nominations for their breakthrough film roles — Rooney Mara as the hardened sleuth Lisbeth Salander in “The Girl With the Dragon Tattoo” and Steve Carell channeling John du Pont in  “Foxcatcher” — the two actors are back with very different performances. Mara is shy and subtle as a young woman in the 1950s who falls for Cate Blanchett’s lead character in “Carol.” And Carell is all manic energy and heart in “The Big Short,” which details the individuals who cashed in on the recent housing collapse.

Rooney Mara: Tell me a little bit about what drew you to wanting to play your character?

Steve Carell: The script was really good, and the subject matter is based on the financial collapse in 2008. Everybody knows a little bit about it, but I hadn’t read the book, “The Big Short,” so I was intrigued by the subject matter. I thought it was very relevant right now, and scary as hell, because there is a lot of information that I didn’t know before I started digging in. And obviously getting to work with someone like Adam McKay again — I’ve known Adam since the ’80s; we worked at Second City together — so I think that was a big draw.

Mara: Do you feel like after being in the film and reading the book that you have a full understanding of what happened and how it happened?

Carell: Not at all. I don’t know anything. Part of what I think was daunting was just learning the language, because I don’t know this world. My dad was an engineer, he wasn’t in Wall Street. So it was very foreign to me.

Carell: Exactly. Not only that, but Adam is a director who encourages improvisation. So you not only (have to) know the lines and understand the concept of what you’re saying, but you have to know a bit more, so when he asks you to improvise, you can do it — or at least can fake it to a certain extent. So what drew you (to your role)?

Mara: It really wasn’t the role that drew me to it. I loved the role, and it was a very different character than I had ever played. But to be honest, it was that I wanted to work with Cate Blanchett, and when I knew Todd Haynes was directing it — those two things were enough for me; I wouldn’t even have had to read the script. Then on top of that, it is a beautiful script and such a beautiful love story. And it was really different than anything I had ever done before. I wanted to show a sort of softer side of myself.

Carell: I found the script was very efficient, and there wasn’t anything extraneous about it. I personally love films like that; they leave something for you to extrapolate from. It doesn’t lay everything out easily.

Mara: One of the things that really works so well is sort of the space between the words and all the silences and nuance and subtlety.  Because it allows for the audience to sort of use their brains a bit more, but also project what they want onto it. While it was a love story between two women, it’s not really a movie with an agenda.

Carell: It was a love story and a very kind story — very human.

Mara: Kind of the opposite of your movie.

Carell: Yeah, you kind of have to dig to find the humanity in “The Big Short.” Something I found in watching your performance specifically was that by the end of it, you can hang on people’s words in movies. I was hanging on your face. Trying to figure out what was going on inside of you.

Mara: A lot of people in my personal life feel that way.

Carell: It was fascinating. You know when they say, “If you want someone’s attention, whisper.” To try to break through the cacophony of all this information and everything happening, sometimes just take it really, really subtle. I felt like your performance was that way, because it was so nuanced that I was hanging on every moment. How did you do that? Do you get sick of people asking you stuff like that?

Carell: Like when people say, “How do you prepare?”

Carell: Because what can you say?

Mara: Also, why do people want to know that? Don’t you want to go into a movie and not know how they did it? To me, my favorite acting to watch is when I have no idea how they did it or what they were doing. Of course, there is the temptation in wanting to know how they did that, but it’s kind of better to not know.