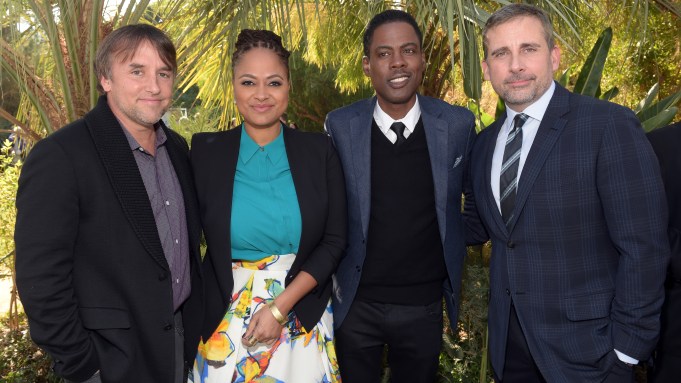 Variety feted Steve Carell, Chris Rock and Rob Marshall along with its 2015 class of 10 Directors to Watch at a brunch Sunday at the Palm Springs Film Festival.

Coming the day after the desert festival’s own gala, the event was dubbed “hangover 5” by Variety executive editor Steven Gaydos, who presided at the Parker Palm Springs.

Julianne Moore, who presented Carell with the Variety Creative Impact in Acting Award, said she had been “creatively impacted” by her frequent screen husband. “I’ve been talking to Steve, I’ve been acting with Steve and I’ve been stealing from Steve,” she said. “That’s what actors do.”

“It’s not just the nose,” she said, referring to how he inhabits his characters including in his latest role in “Foxcatcher,” where he sports a prosthetic nose. “Steve never telegraphs or showboats. He puts his soul and that’s not easy to steal.”

Carell, accepting the Dale Chihuly-designed glass prize, returned the compliments, saying when he saw Moore in “Still Alice,” he just blubbered for a few minutes. “It was pretty embarrassing,” he said, adding, “I feted her yesterday and I will fete her again.”

He then related an anecdote about how his second-grade teacher complimented his acting in a Thanksgiving play. “He singled me out and supported my choice and that had an impact on me, not that my life had been bad up to that point. If he had singled out my science project I would have won a Nobel Prize. Instead, I have a Creative Impact Award and I’m OK with that.”

Marshall acknowledged that musicals are few and far between and even though he had been warned off making one, he was a fan because of Hollywood past helmers like George Cukor and Stanley Donen. “Those are the directors I learned from, and stole from,” he said. “I came from musical theater and never believed the genre is dead. It’s a true American art form. So long as it’s earned and believed, it’s not a parody. When you can’t speak you sing, when you can’t move you dance. But be careful or it can become an ‘SNL’ parody.”

Richard Linklater presented the Creative Impact in Comedy Award to Chris Rock. Discussing his impressive resume Linklater talked about Hollywood’s past  when studios “were handing out cash.” But then the spigot turned off and, “this being Hollywood, studios said, ‘You’re not making money, you all have to leave except for that guy who made “Pulp Fiction.”‘ “

Rock reinvented himself and was on another plane Linklater said, pointing to the latter’s Broadway play, “The Motherfucker With the Hat,” his special “Bring the Pain” and movies including “Top Five.” “He’s always been funny, but when did he get that funny?“

Rock accepted the glass creation saying, “What the hell is this? It’s like a weird bongish thing, I don’t have a bong this nice.”

He brought the house down with his comments about how Hollywood was not in Palm Springs “because we like cactus. We’re trolling for Oscar votes, let’s be honest.” Feb. 21 is his mother’s 70th birthday, he added, “if I’m nominated I’ll take her to the Oscars, if not I’ll take her to Fatburger.”

Variety also introduced its 2015 class of 10 Directors to Watch, all but two of whom were in attendance to accept their plaques: Sean Baker, Justin Benson & Aaron Moorhead, Ava DuVernay, Ronit & Shlomi Elkabetz, Jeremy Garelick, Dan Gilroy, Damian Szifron and Leigh Whannell. Not present were Ruben Ostlund and Marielle Heller.

Among those attending the star-studded event were Robert Duvall, whom the guests serenaded because it was his and his wife’s joint birthday; Hal Linden; the festival’s chairman Harold Matzner, director Darryl Macdonald and artistic director Helen du Toit; Variety publisher Michelle Sobrino, editor-in-chief Claudia Eller, as well as Peter Bart.