Samuel L. Jackson and Michael Keaton on Quentin Tarantino, Acting and the Cold, Hard Truths of ‘The Hateful Eight’ and ‘Spotlight’ (VIDEO) 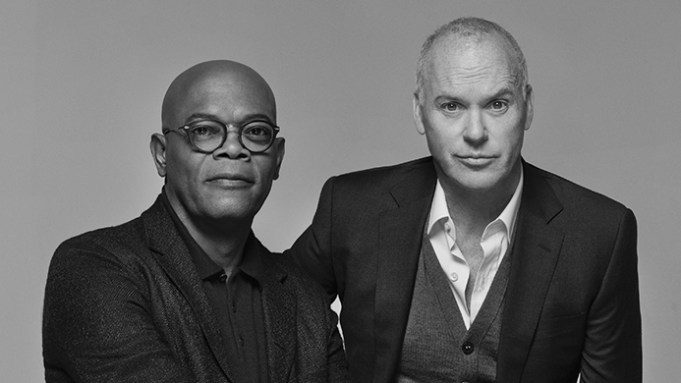 Samuel L. Jackson and Michael Keaton have shared the screen several times, in comedies like “The Other Guys” or dramas such as Quentin Tarantino’s “Jackie Brown.” Jackson is reunited with Tarantino for “The Hateful Eight,” in which he plays a bounty hunter in post-Civil War Wyoming. Keaton leads an impressive ensemble in “Spotlight,” Tom McCarthy’s drama about Boston Globe reporters who broke the story of the Catholic Church’s cover-up of child molestation by priests.

Samuel L. Jackson: (Quentin Tarantino) actually refrigerated the whole stage, so the cast was in there in coats. It was like 30 degrees in there. We drank tea so you could see our breath when we talked, and we’re in our costumes freezing. We’d run outdoors and stand in the sun.

Michael Keaton: Let me tell you, the coldest I’ve ever been in a movie is in “Spotlight.” I’m outside all the time. I feel more comfortable on the outside than I do on the inside, so I’ve been in circumstances where I’ve lost feeling in my fingertips for a while. So I’ve been cold. It’s the coldest in a movie I’ve ever been, not even close. Isn’t it hard to act when you’re cold because you go, “I gotta stay truthful, and I gotta stay honest in this scene, and I can’t feel my mouth move.”

Jackson: Like you, I’ve been on over 100 movie sets, but none of them compare to Quentin Tarantino’s set. There’s no cell phones, there’s no iPads, nothing with an on-off switch. So that when he says, “Cut,” you talk to each other or you talk to a crew member that’s passing by. Or you’re singing the song that the song guys put though the speakers, or you start dancing and hanging around, or Quentin starts talking about some historical film moment that relates to what you’re doing, and you listen to that or some great story from the past about somebody who wrote something like this.

Keaton: And usually, it’s a really, really obscure film reference. You have no idea, and you just nod.

Keaton: Tom is maybe a 180 from Quentin Tarantino in the way that it’s not a hush-hush set. In fact, there’s a lot of repartee going around, and he kind of will be very direct with you and let you know, “That’s not working,” or “That’s not what I think we need to do,” or he’s made the mistake and he’ll say, “Hey, I’m totally wrong. Now that I see it, let’s go here and let’s do that.” Sometimes he’ll go over and over again to where you think we may be approaching the point of indulgence, and then you see it and you go, “No, he was right.” And what was interesting about doing “Spotlight” was it’s about journalists — and these particular journalists, they’re all about drilling down, drilling down, drilling down, get to the truth, truth, truth, truth. And as an actor that’s all you really want to do is tell the truth.

Jackson: So did you guys rehearse more than when you got in the moment to set up the camera, or did you rehearse rehearse?

Keaton: We rehearsed. I don’t know how you feel about rehearsal. I think it depends on the movie, but nine times out of 10, some version of rehearsal really helps a lot. Even though you don’t want to do it, sometimes you’re so glad you did it.

Jackson: I never don’t want to do it because I came from theater, and that’s what we do. We rehearse, and people always go, “Ah, you know I like the spontaneous improv thing.” And I say, “You know what? You can’t be that because the camera’s gotta be there and they gotta light it and you gotta do this.” If I decide to run across the room, you can’t shoot that.

Keaton: Plus, don’t you think that there is a little bit of room that you keep in your back pocket to be spontaneous?

Jackson: Well, something always happens in the moment, that (provides a) foundation. Like being a carpenter, if you know how to measure a piece of wood and cut it in the moment, they might hang the wood on you. It might be softer or it might be harder, but you still gotta know how to cut it, how to measure it, how to make it fit in this thing. So even with us, as long as you have a firm foundation, you’re not going to go that far off the rails.