Oscars: Joan Rivers Left Out of In Memoriam Tribute 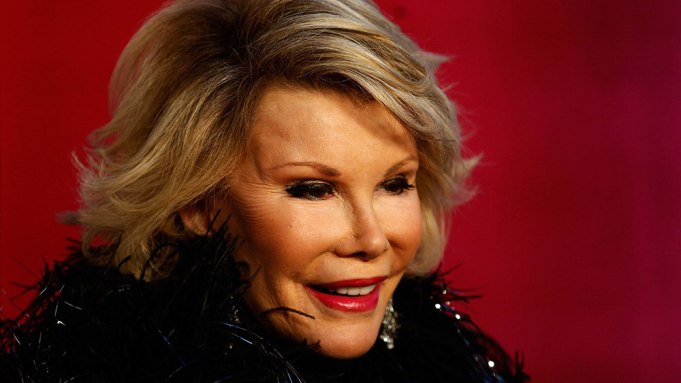 The Academy Awards’ “In Memoriam” segment offered an egalitarian salute to a broad range of industry figures who died during the past 12 months.

The segment presented by Meryl Streep gave equal time to Golden Age legends and below-the-line veterans. In a departure from past years, there were no clips for any of the more recognizable names but rather a series of stylized photo illustrations. Academy officials have long urged attendees to avoid giving the impression that the tribute is a popularity contest by holding applause until the end.

The segment opened with Mickey Rooney followed by director Paul Mazursky and was applause-free, as far as telecast viewers could discern, in the Dolby Theater until the final image of director Mike Nichols flashed on screen.

Joan Rivers was a notable omission from the on-air list. The comedian who died at 80 in September had a limited film resume, to be sure, but she became a fixture of Hollywood’s awards season for her caustic red carpet hosting gigs. She also directed the 1978 Billy Crystal comedy “Rabbit Test.”

By contrast, film critic Charles Champlin made the cut. So did Maya Angelou, novelist-writer Gabriel Garcia Marquez and artist-designer H.R. Giger. Oscar watchers also noted that actress Polly Bergen, who had a memorable role in 1962’s “Cape Fear,” among other pics, was not mentioned on air although she like Rivers is featured in a photo gallery on the Oscars.com website.

Many viewers took to social media to cry foul on Rivers’ absence from the televised tribute, prompting the Academy to issue a statement: “Joan Rivers is among the many worthy artists and filmmakers we were unfortunately unable to feature in the In Memoriam segment of this year’s Oscar show. She is, however, included in our In Memoriam gallery on Oscar.com.”

Robin Williams was among the tragic losses recognized. The Oscar winner for “Good Will Hunting” committed suicide in August at the age of 63.

Swedish director Malik Bendjelloul was a phenom who went all the way with his first film, 2012 documentary “Searching for Sugar Man,” and was found dead at 36 in May, a little more than a year after winning the Oscar for his first film.

Luise Rainer, the first actor to log back-to-back Oscar wins, for 1936’s “The Great Ziegfeld” and 1937’s “The Good Earth,” got another nod from the Academy tonight, despite having mostly turned her back on Hollywood since the 1940s. Anita Ekberg and James Shigeta were also names from a distant era remembered by the Acad.

The segment closed with Jennifer Hudson singing the ballad “I Can’t Let Go,” an original song from the NBC musical drama series “Smash,” which was exec produced by Oscar telecast producers Craig Zadan and Neil Meron.