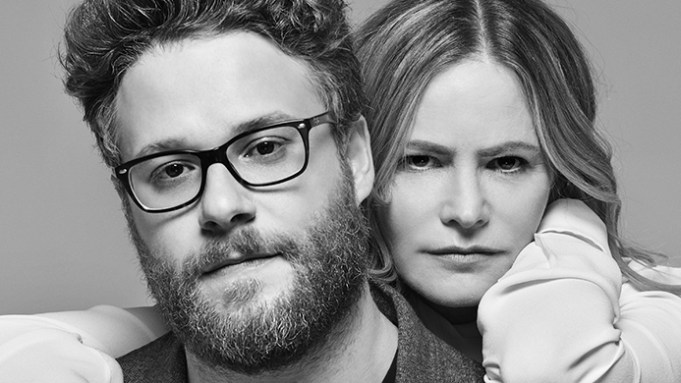 Jennifer Jason Leigh and Seth Rogen stopped by the Variety Studio to discuss Quentin Tarantino’s “The Hateful Eight,” a period Western in which Leigh stars as a tough murderess, and “Steve Jobs,” in which Rogen plays Steve Wozniak, co-founder of Apple with the movie’s titular figure. The conversation has been edited for clarity and space.

Jennifer Jason Leigh: I want to know about you playing Steve Wozniak.

Seth Rogen: I read the script, and it was very, very good. I wasn’t sure they would want me to be in the movie, but I auditioned for it. Which I hadn’t done in a few years. But I had auditioned in the previous few years for another movie that I did not get the part. And so my track record wasn’t good. But I really wanted to audition because I was worried that I was going to blow it, and I wanted it to be on them for choosing me.
Did you read with Quentin?

Leigh: Yes. And the great thing about reading for Quentin is you’re not reading for him, he’s reading with you. So he sits right next to you. And we read the script, the scene, together. It was scary, but I really wanted it, so I just sort of did my best.
Did you memorize your stuff before your audition?

Rogen: No, not at all. And I remember thinking like, “I hope they don’t expect me to memorize this because it’s like a book.”
Danny (Boyle, director) and Aaron (Sorkin, screenwriter) were very nice, and very supportive. And then I left, and I didn’t hear anything for like six months because … during that time the movie changed studios and stars. And the other actors that were in the movie, I think Christian Bale was in the movie maybe when I got cast originally. And then, and I think it was at Sony and then it completely. … Christian Bale left and Michael Fassbender came in, and it went to Universal from Sony. And somehow I remained in the film.

Leigh: Did you shoot “Steve Jobs” in order?

Rogen: 100%. Yeah, there was maybe like a scene here or there that was done out of order.

Leigh: So like the early stuff in the garage?

Leigh: Do you find it helpful to shoot in order?

Rogen: I did. If I were directing a movie, it would scare me … I think people do get better as the movies go on sometimes, and I’m always happy that we’re shooting out of order, so it’s kind of scattered throughout the movie, and there isn’t like a clear build in everyone finding their characters. You know, things get refined a little bit as the process goes on. But as an actor, I loved it. I thought it was much easier in a lot of ways.
I’m very curious in regards to “The Hateful Eight” specifically about the blocking of the movie. Because in comedies, we don’t block. We basically like have to position the actors’ bodies in the way that is most conducive to filming both of them simultaneously.

Leigh: Quentin’s thing is “I don’t want anybody to get up until they have to. So, because he really wants things to come organically. And he may have specific things like “No, this … I want you to be here so that when he punches you, it falls. I want that action to happen here.” But you feel like it does, all the blocking does come from an organic response to the material.

Leigh: Do you improvise at all with an Aaron Sorkin script?

Rogen: No, not at all. And does Quentin do that?

Rogen: And does he change anything on set at all?

Leigh: Some days he would change things and he would come in and it would be hand-written. He doesn’t use a computer. So you’d have, like, the chicken scrawl, you know?

Leigh: We’d be reading and it’s just great to have something in his handwriting.

Leigh: Or if he wanted you to listen to music, he would give you a cassette tape. He has tube TVs.

Rogen: That’s actually weird. If you take a tube TV to a donation center, they won’t accept it.

Leigh: Well Quentin will take it.

Rogen: The Salvation Army will be like, “No, literally people without TVs don’t want these anymore.”

Rogen: I did meet Steve Wozniak on several occasions leading up to the filming of the movie. It wasn’t really written how he is. So the second I met him, it almost was a relief, because I was like, “OK, good, the real Steve Wozniak is like one of the least confrontational people you would ever meet in your entire life.” And he admittedly would never like say the things he said to Steve Jobs (in the movie) in the context that he said them.
He’s literally one of the sweetest guys. And that was kind of the thing I had to reconcile: how do I try to do this guy’s sweetness justice in some capacity when most of the things I’m doing in the movie are pretty confrontational, and pretty argumentative.

Leigh: But you did it!

Leigh: No honestly, I mean I can’t imagine anyone else playing that part.

Leigh: So how did you find it?

Rogen: I don’t know, a lot of it was written. I mean, we just talked about it a lot. I think that’s just a helpful process, where you just talk, and you ask, “What do you think? Do you think he’s upset about this?”
We don’t often have the luxury of time to have these conversations where you just literally get to sit around for day and days and analyze every line of dialogue.

Rogen: Yeah, just to watch. And at the end of it, we could run each act like a play.

Leigh: Well, it could actually be a play.

Rogen: I know, we were all saying it was kind of a waste not to do it like a play.

Leigh: Maybe you will.

Rogen: Yeah, maybe one day. Maybe that’s how they’ll get their money back.
The character that you play in the movie is so amazing. It’s incredible because you say much less than most of the characters, for the majority of the movie, but you are, by a lot of means, the focus of the entire movie. And the one you’re watching, for me, throughout the course of the entire movie.

Rogen: You look disgusting throughout a large amount of the movie.

Rogen: In the greatest way. It’s truly amazing, the amount of physical punishment you take throughout the movie.

Leigh: What you see in the trailer, is the best I look. But blood sometimes can be very sticky.

Leigh: And when it’s on your hair, and then your hair’s on your face. And then you talk and everything starts to pull. And when you take it off it hurts. But I didn’t mind the hot shower at the end of the day.

Rogen: There were some scenes where I had an empathetic moment of just discomfort, like watching just physical discomfort.

Leigh: Is there something about yourself that you learned in the last five years? Do you cry easily?

Rogen: Do I cry easily? I do find myself crying at moments that suggest I probably have some sort of deep-seated mental issue. I cry during commercials a lot that are emotional. There was a Subaru commercial that showed a guy taking his dog on a bucket list adventure, and that made me cry for like an hour straight. So yes. I learned that I probably need to see a therapist.

Rogen: How about you? Have you learned anything about yourself?

Leigh: I don’t do great on very little sleep.

Rogen: Did you sleep well during “The Hateful Eight” shoot?