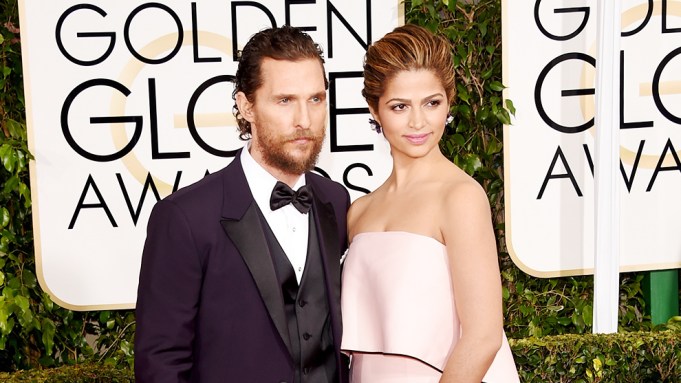 Glamorous Golden Globes fashions provided a lighter counterpoint to the many serious topics brought up by hosts and presenters on the red carpet and during the 72nd annual ceremony.

Stars including George Clooney sported “Je Suis Charlie” buttons in support of the Charlie Hebdo attacks and though it wasn’t planned that way, the colors of the French flag were well-represented: red on Taylor Schilling, white on Kate Hudson and blue on Natasha Lyonne.

Red gowns had a big moment on the red carpet: in addition to Schilling, nominees Julianna Margulies, Helen Mirren, Lena Dunham and Allison Janney all matched the carpet in scarlet, along with other attendees Catherine Zeta-Jones, Christine Baranski, Allison Williams and Kate Mara.

Many bare shoulders were on display, with comedy actress winner Amy Adams and Julia Louis-Dreyfus both sporting one-sleeved gowns.

Felicity Jones, nominated for her performance as Jane Hawking in “The Theory of Everything,” sported a deep teal Christian Dior gown, which received mixed reviews from fashion critics for its prim and proper cut. Most of  the men were somber, except for actor winner Eddie Redmayne, who sported a green suit.

“Gone Girl’s” Rosamund Pike showed off her post-baby body in a white Vera Wang gown that wasn’t universally popular, with thin straps and cutouts that looked like they could come apart at any minute.

Keira Knightley, who usually knocks it out of the park when it comes to red carpet style, didn’t win over as many viewers with her Chanel maternity gown bedecked with butterflies and ruffles.

Another trend on display on the carpet was shimmery fabric, as seen on Julianne Moore and Reese Witherspoon. Dakota Johnson took the metallic look one step farther with a heavily beaded and sequined Chanel gown.

Jane Fonda combined a few of this year’s trends with her red Versace gown, with an age-appropriate spin on the one-shoulder look in the form of a customized bejeweled sleeve.

Awards ceremony gowns in the last several years have more tasteful than gasp-worthy, but as Soloway, Wurst and Knightley showed, there’s still room for surprise.

(Pat Saperstein contributed to this report.)