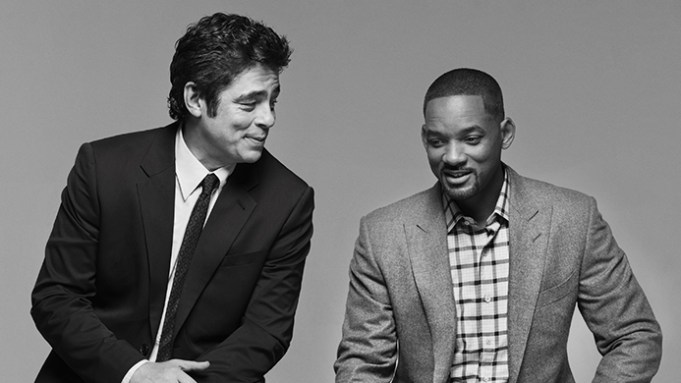 Benicio Del Toro landed an Academy Award for 2000’s “Traffic,” in which he played a conflicted police officer. His new film, “Sicario,” puts him back in the world of drug trafficking, but as a very different character — a mysterious, dangerous man bent on revenge. Will Smith has earned two Oscar nominations for playing real-life people in “Ali” and “The Pursuit of Happyness.” He stands to earn his third nod for his portrayal of Dr. Bennet Omalu, a doctor who fought against the National Football League to expose the danger of head trauma in players. Among many topics, the two spoke about their mutual love of Roger Deakins and Eddie Murphy.

Will Smith: I got that call that actors love to get. It’s late on a Friday afternoon, and I get the call that says, “Ridley Scott’s on the phone for you.” He said, “I’ve got a gift for you.” And he sent me “Concussion.” I read it immediately, and I remember thinking, “This ain’t no damn gift! I’m a football dad.” So for me, it was a beautiful screenplay, but it opened up a huge conflict. How did “Sicario” come to you?

Benicio Del Toro: I read the script. I thought it was original. And then I got to meet with Denis Villeneuve, the director. His enthusiasm, his vision, his sensitivity to the project convinced me. And then there was the cast and, last but not least, the director of photography, Roger Deakins …

Smith: He asked me to leave him alone the other night. It was the first time I met him. I was like, “Hey man, listen, I love what you do!” He said, “Well thanks, man. Come on, you know, you’re embarrassing me.”

Del Toro: Those elements put together — script, director, actors and Roger Deakins — that made me want to do it.

Smith: (I met) the director, Peter Landesman, and Dr. Bennet Omalu back to back. Peter Landesman is an investigative journalist; he’s rock solid. Dr. Omalu is a Nigerian immigrant, and he said something to me, a line we used in the movie. He said, “As a little boy growing up, heaven was here, and America was here (just beneath).” To him, America was the place where God sent all of his favorite people.

Del Toro: And that’s in the movie.

Smith: That was really huge, when I can latch onto that desire. I’m always looking for the one thing that covers the entire movie, you know?

Smith: When I was 15, my girlfriend cheated on me. And from that moment, in this bizarre psychological twist, I wanted to be the most famous entertainer on Earth, because I believed that your girlfriend couldn’t cheat on you. It’s that really bizarre psychological leap, and I’m always looking for that in my characters. Have you ever struggled to find a character? Have you ever gotten closer and closer to set and hadn’t had it yet?

Del Toro: I don’t think I ever find them. It just keeps evolving. I always feel, to be honest with you, like I get the closest I can get to the character on the last day of shooting, on the last take. I used to beat myself up for that.

Smith: When you got started, who were you modeling yourself after? Who were who were the people that you were like, “All right, I want that?”

Del Toro: When I started going to movies, there were three. It was Robert De Niro, Eddie Murphy and Richard Gere. After I started acting, then it was Al Pacino, Marlon Brando, Anthony Quinn. And then there were other young actors that were doing stuff that was a bit more contemporary, like Sean Penn and Gary Oldman. They were going out there and taking chances, and that’s when I started acting.

Smith: For me, my early life and desire to be an entertainer was all Julius Erving and Eddie Murphy. I grew up in Philadelphia so, you know, 1983, ’76ers, world champions. And Julius Erving was, and still is, such an absolute gentleman. And then when I started thinking about moving toward acting, it was right at the heart of “Raw” and “Delirious” and “48 Hrs.” I was like, “Oh my God, I want that, I want that.” And it was that combination that really formed the early parts of my career.