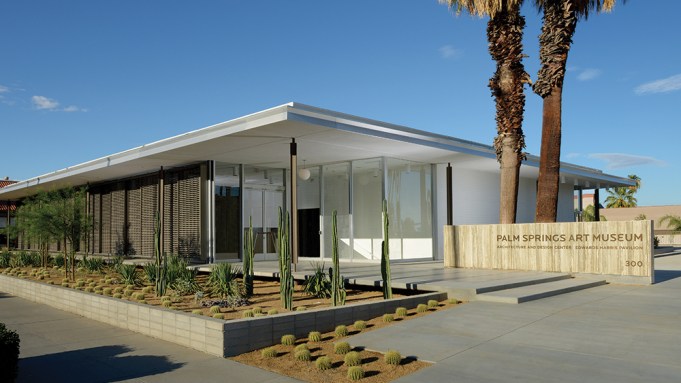 The current popularity of Palm Springs and its environs with showbizzers goes back to the 1920s with a break in between. Frank Sinatra gets credit for spurring the region’s preference for mid-century modern homes — once he built his house in 1947 (by Desert Modern architect E. Stewart Williams), everyone else wanted in.

While the story is apocryphal, there’s no denying that the area has great appeal to creative types. The name on everyone’s lips these days is Leonardo DiCaprio who recently bought the former Dinah Shore estate (for a reported $5.23 million), a fully restored mid-century compound designed by architect Donald Wexler in Old Las Palmas (Palm Springs’ subdivision of grand, mostly gated estates).

The most visible Hollywood-connected residence now on the market is the Bob Hope family’s 23,000-square-foot, John Lautner-designed showplace on Southridge Drive. Set on a promontory overlooking all of Palm Springs and much of the Coachella Valley, the property’s curving copper roof with oculus is a local landmark. “There’s no architecture like this, period,” says listing agent Patrick Jordan of Patrick-Stewart Properties, Windermere Real Estate. “As a piece of architecture it stands alone. It’s one of the world’s most significant residences,” he adds of the $24 million listing, which includes two adjacent lots.

All glass, steel and concrete, the striking architectural residence has both indoor and outdoor pools, a golf hole (tee off just off the front door) with waterfall and tennis court. There are astounding views from almost every room. The outdoor fireplace is so outsized, several people could stand within it comfortably. Guests were entertained by the Hopes on the first level; the entryway encompasses a large rock formation that’s incorporated into the design. Also within the structure are staff quarters, guest rooms and a house manager’s office.

Although the price of the Hope house is not a record-breaker (Larry Ellison’s purchase of Porcupine Creek in Rancho Mirage for close to $43 million has that distinction), it’s currently the highest-priced residence in Palm Springs. The second-most expensive listing is Villa Paradiso, a four-acre estate in Old Las Palmas (listed at $14.5 million by Louise Hampton, Berkshire Hathaway HomeServices).

The traditional Spanish Revival-style main house has a red-tiled roof and other artist-created flourishes throughout. In addition to the main residence, there’s a pool house (named for Cary Grant, once a frequent guest at the compound), two guest houses and staff quarters set in a low-slung adobe. With its manicured lawns, lily pond and palms, enclosed by vintage stone walls, it feels like a small luxury hotel.

“There is a new life and new energy to Palm Springs,” says Hampton. That revived popularity has resulted in a decline in available inventory: Hampton notes only 12 houses are for sale (out of 300) in Old Las Palmas. And although the great recession still looms large, Palm Springs sales prices are now only 12% off their historic high.

Driving real estate pros’ optimism and buyer demand in part, is the demolition and complete re-do of central downtown’s long-shuttered shopping mall. The renovation, and other civic improvements, such as a new Kimpton Hotel, will total more than $143 million when completed.
“The blight that was depressing downtown will be gone,” enthuses Scott Palermo, Scott & Jim Desert Homes, Windermere Real Estate, of the game-changing development. Along with his partner Jim Sanak, the pair has a Movie Colony estate that epitomizes Palm Springs’ buoyant 1960s. Open the door to a pool surrounded by a colonnade and a series of open-to-the-air rooms; the current owners expanded the James McNaughton design and added a second pool and complete outdoor kitchen and living room.

One of the beauties of Palm Springs is that buyers “can choose homes by the decade,” says Dean Sipe of the Fletcher Sipe Group of HOM Sotheby’s Intl. Realty. Along with Gregg Fletcher, he’s representing a classic hideaway behind high hedges (listed at $2.195 million) built originally in 1925 and owned by Carole Lombard. The Spanish Colonial-revival estate, now owned by producer Joel Douglas, comes fully furnished, including a pool table built for Kirk Douglas, Joel’s father, keeping Palm Springs’ link to old and new Hollywood alive.