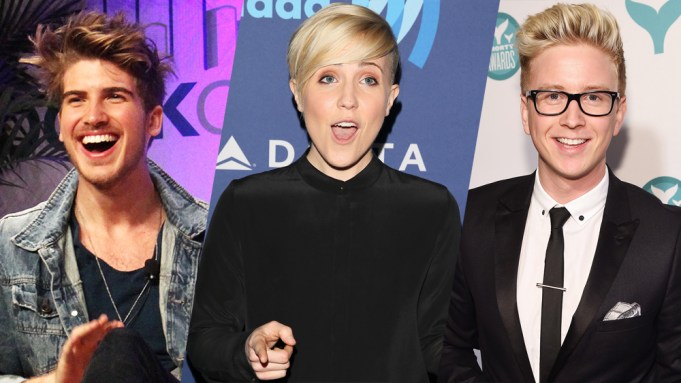 YouTube, after the U.S. Supreme Court decision Friday legalizing same-sex marriage nationwide, touted its role as a catalyst for the LGBT community over the last few years — with equally enthusiastic responses from some of the site’s biggest stars.

The Google-owned site posted a video montage that includes gay YouTubers’ stories with the hashtag #ProudToLove, patting itself on the back as being a home for LGBT creators to connect.

“YouTube has given creators like Tyler Oakley and Jazz Jennings, to entertainers like Ellen DeGeneres and Todrick Hall, a platform to entertain and inspire, while raising LGBT awareness in society as a whole,” it wrote in a blog post. “Thanks to creators and fans alike, YouTube has become a home to coming-out videos and transitioning videos, a place where people can share advice, find a community, or encourage activism.”

YouTube isn’t completely overstating its case. For example, in 2010, the #ItGetsBetter meme took off after gay activist-writer Dan Savage posted a YouTube video reassuring gay teens being bullied or harassed that things will improve.

The site’s biggest gay stars reacted with digital applause at the Supreme Court ruling — although immediately, they are taking to Twitter to voice their delight.

“OMG! What a beautiful freaking day! Same-sex marriage now legal in all 50 states… ABOUT DAMN TIME! #Equality,” tweeted Joey Graceffa, who has 4.9 million YouTube followers. The 24-year-old vlogger in May announced he was gay in a coming-out video, something he said he has been considering for two years. The video was timed to promo his recently released book, “In Real Life.”

Tyler Oakley — a top YouTuber who came out when he was 14, before the video site even existed — also weighed in on Twitter: “I’ll never forget today. thinking of all the incredible LGBTQ+ icons who paved the way.”

Oakley, with 7 million YouTube fans, has used the video site and other social channels to raise money for the Trevor Project suicide-prevention organization. In March he reached his $500,000 fundraising goal for 2015, becoming the org’s largest single contributor.

so happy to see marriage equality in all 50 states… I'll never forget today. thinking of all the incredible LGBTQ+ icons who paved the way

im on the verge of tears thinking about all the brave people who have spent years fighting for this day. thank you. love always wins.

What a happy day! Congrats to America!
#LoveIsLove #LoveWins