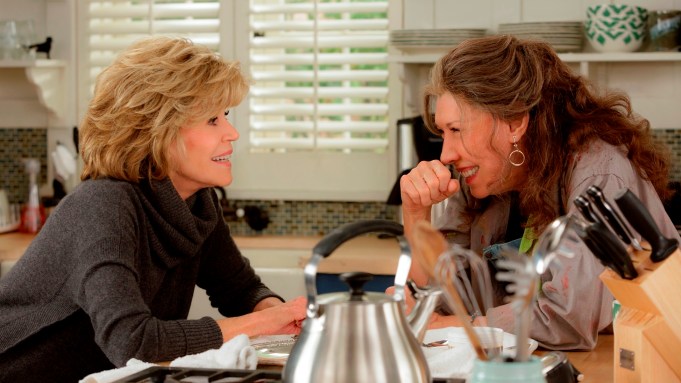 Netflix released a new trailer for “Grace and Frankie,” its original comedy series starring Jane Fonda and Lily Tomlin as women of a certain age who unexpectedly discover their husbands are gay — and plan to leave their wives to get married.

The project reunites Fonda (Grace) and Tomlin (Frankie), who co-starred with Dolly Parton in the 1980 feature hit “9 to 5.” Martin Sheen and Sam Waterston co-star as the unexpectedly gay duo, who drop the bombshell on Grace and Frankie that they’re going to get married.

In the trailer, Waterston’s character (Sol) tell the wives, “We want to get married” — whereupon Sheen (playing Robert) adds, “Because we can do that now.” Retorts Frankie: “I know: I hosted that fundraiser!”

“Grace and Frankie” premieres Friday, May 8, with all 13 episodes dropping in binge-friendly fashion, as is Netflix’s standard practice, in all territories the service is available.