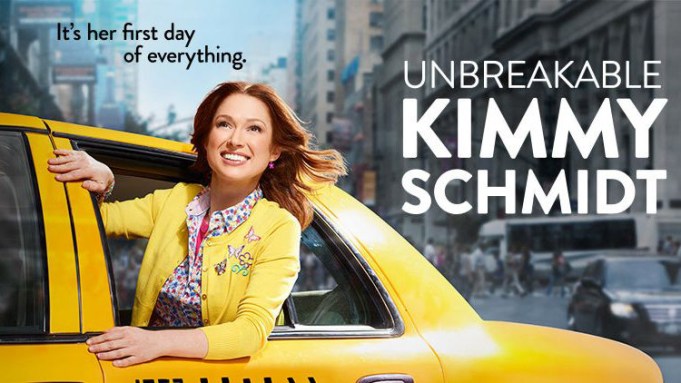 Prepare to set a binge-watch date with “Unbreakable Kimmy Schmidt,” Netflix’s new comedy from “30 Rock” creators Tina Fey and Robert Carlock. The streaming site has released a new trailer for the 13-episode series, which stars “The Office’s” Ellie Kemper as the titular heroine.

After living in a cult for fifteen years, Kimmy (Kemper) decides to reclaim her life and start over in New York City. Armed with just a backpack, light-up sneakers, and a couple of way-past-due library books, she’s ready to take on a world she didn’t even think existed anymore. Wide-eyed but resilient, nothing is going to stand in her way. She quickly finds a new job (working for a neurotic socialite played by Jane Krakowski), a new roommate (Tituss Burgess), and a new beginning. The cast also includes Lauren Adams, Sara Chase, Sol Miranda and Emmy winner Carol Kane.

The show hails from Universal TV and was originally slated to air on NBC’s midseason schedule before Netflix’s acquisition.

“When the opportunity arose for Tina Fey and Robert Carlock to premiere their new show on Netflix with a two-season commitment, we decided this was the best possible scenario to launch this captivating new series,” said NBC Entertainment chairman Robert Greenblatt in a statement.

“We were just having conversations with NBC about scheduling and about where we could go and where they could launch us, and it was just a really honest and productive conversation we were having with them about the larger landscape of comedy right now. And we just said, ‘Could we explore other options?'” Carlock said of the move at the show’s recent TCA Winter Press Tour presentation. “Bob and Jen [Salke] were just completely supportive of finding the best place for it to live.”

Fey added, “The show is made by NBC — it’s in NBC’s best interests for the show to have its best home. And rather than trying to stick it on NBC between a multicam and a drama, they agreed that this would be the right place for it.”

Fey and Carlock serve as executive producers on the project along with Jeff Richmond, Jack Burditt and David Miner.