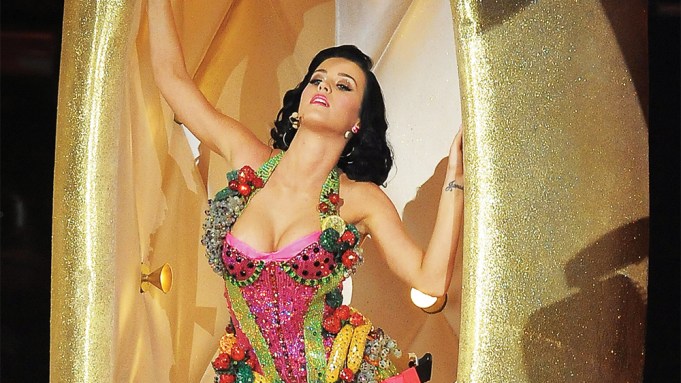 Katy Perry will use her time in the spotlight of the Super Bowl XLIX halftime show as a launchpad to flog limited-edition products to her fans.

The songstress, in partnership with Universal Music Group and halftime show sponsor Pepsi, will reveal the exclusive Perry-branded items across social and Internet channels during her live performance on Feb. 1.

But her product pitch won’t be carried in NBC’s Super Bowl telecast, expected to be the most-watched TV event of the year. Instead, the Katy Perry merchandise will be promoted — and available to purchase — via Twitter, YouTube, Shazam and Internet-connected TV devices from Roku, Samsung and LG Electronics.

The first “shopping-enabled” Super Bowl halftime is being powered by San Francisco-based interactive commerce provider Delivery Agent, which has inked a deal with Visa to be the exclusive payment service for the promo.

Using Twitter’s “Buy Now” feature, tweets sent from accounts including @pepsi and @Visa will let users purchase the products directly from the social service. In addition, @katyperry — which has 64.1 million followers — may also be tweeting the “Buy Now” offer, but reps said that was not confirmed.

On YouTube, videos on Perry’s Vevo channel — which has 14.8 million subscribers — will be enabled for click-to-buy commerce via overlays. Users of Shazam’s app will be presented with the opportunity to buy the Katy Perry products if they Shazam music from the halftime show.

In addition, users of Roku set-tops and certain Samsung and LG Electronics connected TVs will be able to use their remote controls to shop for the products during the halftime show by accessing the ShopTV app on the respective devices. The device partners will promote the Katy Perry commerce stunt within their guides.

For last year’s Super Bowl, Delivery Agent worked with retailer H&M to commerce-enable its ad in Fox’s broadcast, to let viewers purchase items from David Beckham’s Bodywear line. But that was limited to Samsung Smart TVs. This year, the potential buying audience for Perry’s goods will be considerably larger: There are 20 million Samsung, LG and Roku devices available with ShopTV, “but if you take into account Twitter, Shazam and YouTube, you get into much bigger numbers,” said Delivery Agent CEO Mike Fitzsimmons.

Katy Perry’s Super Bowl product promo will encompass other marketing elements, including online ads and an email campaign. The products will be available to buy through Tuesday, Feb. 3, at 5 p.m. PT (or until supplies last).