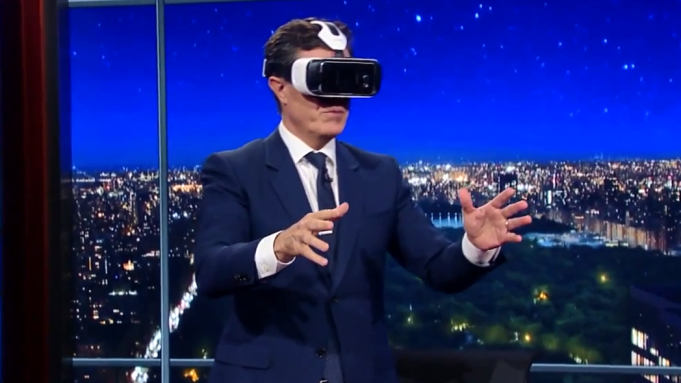 The host of CBS’s “Late Night With Stephen Colbert” kicked off the show Thursday with a riff on CNN’s plans to live-stream a virtual reality feed of the Oct. 13 Democratic presidential primary debate.

“Folks, the future we were promised by ‘Johnny Mnemonic,’ ‘Virtuosity’ and your childhood View-Master has finally arrived,” Colbert said.

Citing Variety‘s article on the CNN VR webcast that will let viewers focus on any part of the stage, Colbert quipped: “Because we’ve all dreamt of a full immersive environment where we can watch Lincoln Chafee take notes while someone else talks.”

And he used the VR hook to take a dig at the Democratic front-runner: “It’ll feel like you’re seeing Hillary Clinton right in front of you — but she’s not actually there, just like the real Hillary Clinton.”

CNN’s first foray into virtual reality is really just a test run, given that not many people today have the Samsung Gear VR headsets required to watch the debate in VR. Samsung has been selling an early “innovator” edition of the product for $200, and plans to launch a $99 model that includes a Netflix app sometime this fall.