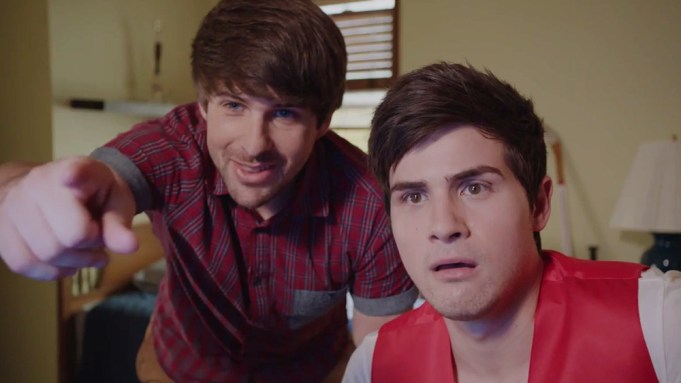 The trailer for “Smosh: The Movie” — starring the comedy duo behind the hit YouTube channel — has hit the web.

The film, rated PG-13, stars Ian Hecox and Anthony Padilla, the two childhood friends who created Smosh, which has more than 30 million followers across several channels. “Smosh: The Movie” is slated to premiere July 22 in L.A., to be followed by a fan screening July 23. It subsequently will be available from multiple digital distributors.

The movie, co-produced by Defy Media and AwesomenessTV, stars Padilla and Hecox in what’s billed as a modern-day version of “Bill & Ted’s Excellent Adventure.” Indeed, “Smosh: The Movie” is directed by Alex Winter, who co-starred with Keanu Reeves in the 1989 time-travel romp.

Following the premiere, “Smosh: The Movie” will be launched in a limited theatrical release as well as on digital and VOD platforms.

“Smosh: The Movie” revolves around an embarrassing video of Anthony that has surfaced online — right before his fifth high school reunion. The Smosh guys scramble to pull down the clip before it blows Anthony’s chances of reconnecting with his teen crush, Anna, encountering several well-known YouTubers in the process.

While Lionsgate last fall acquired global distribution rights to “Smosh: The Movie” (previously titled “The Smosh Movie”), it is no longer involved in the project — with AwesomenessTV to handle distribution. The production was jointly financed by DreamWorks Animation’s AwesomenessTV and Defy Media, in which Lionsgate has an equity interest.

“‘Smosh: The Movie’ marks a major next step in serving the millions of Smosh fans and an opportunity to entertain millions more,” said Defy Media CEO Matt Diamond.