Pixar Outdoes Itself: ‘Good Dinosaur’ Outpacing Megahit ‘Inside Out’ 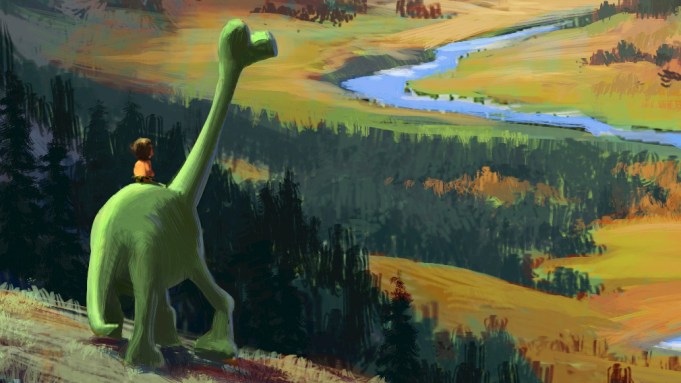 Pixar is getting early indication that “The Good Dinosaur” could be an even bigger hit than its previous blockbuster, “Inside Out.”

The journey into the world of dinosaurs has generated 3.7 million engagements across digital platforms over the past 30 days with six weeks to go until release, according to ListenFirst Digital Audience Ratings (DAR), more than doubling “Inside Out’s” 1.5 million within the same window.

That’s good for No. 4 for the week on the DAR-Film Leaderboard (below), and should ensure is on track to further Pixar’s record breaking year as “The Good Dinosaur” enters a crowded Thanksgiving season in theaters.

By this point in the campaign, both films had been featured at Disney’s D23 Expo and released 2-3 trailers a piece, a relatively even playing field. The two titles track within 10% of each other on Facebook and Wikipedia, but “The Good Dinosaur’s” specific strengths are Twitter and YouTube. The trailers released by “The Good Dinosaur” to date have successfully generated a higher volume of Twitter buzz (+306%) and views (+230%) when compared against “Inside Out.”

Another animated film, Sony’s “Hotel Transylvania 2,” held on the leaderboard for the fourth week in a row and also cracked $200 million worldwide this week. Despite a fall from fourth to fifth overall, fans continue to flock to YouTube, ready to check out the #1 Comedy in America and check in at theaters.

Each week Variety publishes ListenFirst Digital Audience Ratings (DAR) – Film, a measurement of fan engagement across all the major digital platforms as it relates to film (see the TV version here). Provided by ListenFirst Media, DAR – Film measures what entertainment content is resonating most across Facebook, Google+, Instagram, Tumblr, Twitter, YouTube and Wikipedia combined. For more on the methodology behind DAR, scroll to the bottom of the article.

Jason Klein is the Co-Founder and Co-CEO of ListenFirst Media, a data and analytics company providing insights for brands. ListenFirst aggregates data streams from a wide range of digital, social, and traditional marketing sources to help brands optimize business performance.

Organic conversation volume is calculated based on the use of official hashtags, as well as those hashtags submitted directly from distributors. Only hashtags where conversation can be isolated to a specific film are included in the rating.

The Variety Weekly Top 5 and Trending leaderboards for film represent the 7-day (Wednesday – Tuesday) sum total of DAR for all US Domestic Films that have been publicly announced and slated for a commercial theatrical release. Films are rated daily from initial public announcement through 4 weeks post home entertainment street date. Festival films and other films not slated for a commercial theatrical release are excluded from this ranking cohort but available to be rated directly by ListenFirst Media.

The Trending leaderboard surfaces the three films that tracked the largest relative growth in DAR (from the previous 7-day measurement period), and are also in the top 25% based on absolute DAR.

ListenFirst monitors the official digital account owned by the film on each aforementioned platform (except for Wikipedia, where the title-specific profile is considered official). Only the U.S. version of a film’s digital presence is monitored; for platforms that support regional profiles like Facebook, the “Global” profile is considered the U.S. profile. Only profiles that can be attributed to the specific film contribute to the rating (i.e. engagements that happen on the profile facebook.com/ArgoMovie are tracked, while engagements that happen on facebook.com/WarnerBrosPictures are not). For YouTube, in addition to any film-specific presence, content related to the film in question that originated on the parent company’s official YouTube channel is considered.

For other questions pertaining to methodology, contact ListenFirst Media.