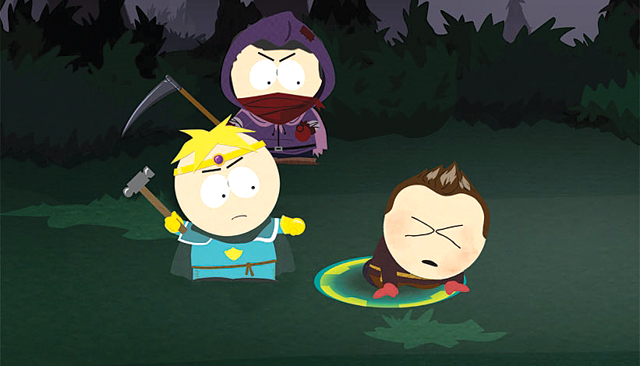 Ubisoft is going back to “South Park.”

The publisher surprised fans and attendees of its 2015 E3 media conference with an appearance by Matt Stone and Trey Parker, who announced they would be collaborating with Ubisoft on a sequel to last year’s “South Park: The Stick of Truth” called “South Park: The Fractured But Whole.” No release date was announced.

The publisher’s event was a star-studded affair. Actress Aisha Tyler once again hosted – and Academy Award-nominated actress Angela Bassett was on hand to announce she will appear as the head of the titular counter-assault team in “Rainbow Six: Siege.”

“I have always gravitated towards roles that challenged as an actor, so in that respect, it wasn’t much different,” she told Tyler on stage. “It was all about character. It was all about story. And I was able to take on the character and make her my own.”

This will be Bassett’s first appearance in a videogame.

The company’s previous “South Park” game, with which Stone and Parker were heavily involved, sold 1.6 million copies — a solid success, if not an out-of-the-park hit.

A “South Park” sequel is a bit unusual given those sales, but what makes the concept especially surprising is the turbulence that accompanied the original. Started in 2009 by Stone and Parker along with Obsidian Entertainment, the game was originally set to be published by THQ in 2013. THQ went under, though — and Ubisoft bought the rights to the game for $3.2 million. Unhappy with the quality of the game, the publisher pushed it back by roughly a year until its eventual March 2014 release.

Once released, the game courted controversy, just like the show, by incorporating everything from abortions to Nazis to testicles. But critics said it was the first “South Park” game to get the show’s humor right.

While “The Stick of Truth” took aim at role-playing and “The Lord of the Rings,” “The Fractured but Whole” has superheroes in its sights, with Cartman and crew donning spandex.

Beyond “South Park,” Ubisoft will continue in its role as a company that embraces new technology, announcing plans to explore the virtual reality space — with a trio of demos (Ubisoft did not showcase its virtual reality plans at the event, but discussed them at a separate media meeting). The company will also stick to its sweet spot, giving updates on several upcoming action games — including Tom Clancy’s “The Division,” which will be released March 8, and “Assassin’s Creed Syndicate,” which debuts on Oct. 23.

Ubisoft’s “Just Dance,” the industry’s most popular dance game, had a surprise of its own, with Jason Derulo appearing onstage to perform his latest single “Want You to Want Me.”

As for the game itself, as Microsoft and Sony pull back from cameras with their consoles, Ubisoft has changed the design allowing fans to use their smartphones with the game, opening it up to a wider audience.

Derulo had a little fun onstage himself, trying to convince Tyler to play the game. She declined.

“I am living, stumbling proof that not all of our people can dance,” the comedienne replied.