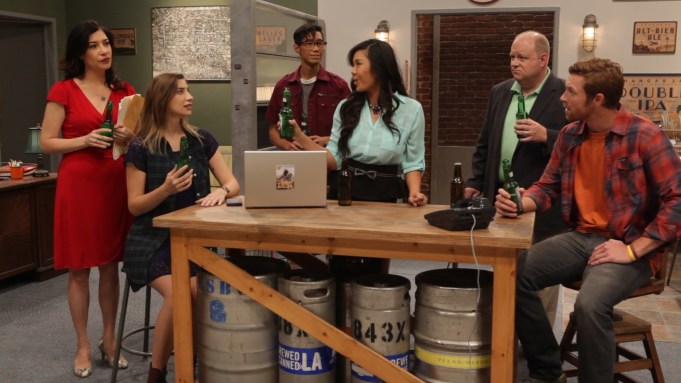 Set in a microbrewery, the workplace comedy follows a group of beer lovers and brewers as they compete in a growing industry. The series stars Sam Daly (“Hot in Cleveland”), Arianna Ortiz, Kevin High, Alicia Ying, standup comedian James Lontayao and Sarah Stoecker.

Executive producer Sam Miller, also a staff writer on CBS’ “Mom,” was looking to create a primetime-quality Web series. “I was a writers’ assistant who just wanted to experience the collaboration and creative energy that only comes from being a writer in a writers’ room,” Miller said. “Fortunately, I found an amazing group of dedicated people who believed our combined industry contacts and resources could produce a show that was just as good as something on television. Making Web series history and getting free beer was just a bonus.”

“L.A. Beer” was funded via Kickstarter, allowing the team to produce the sitcom for “1/200th of what the comparable cost for a network sitcom would be,” according to Miller.

The series will debut with five episodes on YouTube beginning May 11, in conjunction with American Craft Beer Week. Five more episodes will drop in June to align with L.A. Beer Week.

“We have #Beer themed episodes for American Craft Beer Week and #LA themed episodes for LA Beer week,” Miller said. “After that, depending on our ability to grow an audience, we hope to find interested buyers or possibly do another crowdfunding campaign.”