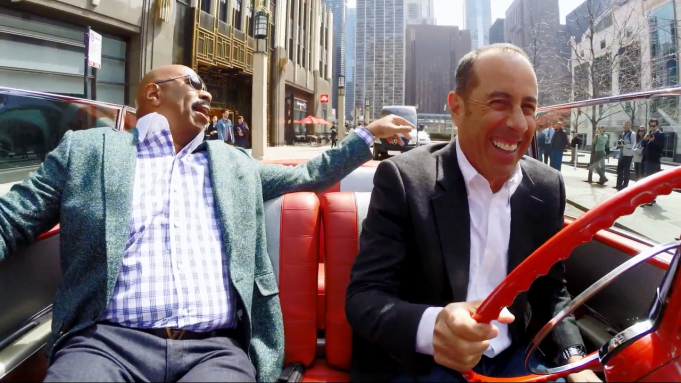 Jerry Seinfeld’s “Comedians in Cars Getting Coffee” — Sony Crackle’s most popular interview original series — is slated to return for a sixth season June 3 with guest stars including Jim Carrey, Stephen Colbert, Julia Louis-Dreyfus and Steve Harvey (pictured above with Seinfeld).

Crackle is positioning season 6 of the show, in which the comedian drives around in exotic autos (and yes, drinks coffee) with his subjects, as somehow competing with traditional latenight TV.

New episodes of “Comedians in Cars,” available on-demand for free, will be released weekly Wednesdays at 11:30 p.m. ET, starting June 3. That, according to the Internet-streaming service, makes it the only Internet-distributed show “to go head-to-head with latenight programs” — but it’s questionable how significant the competition will be for viewers against the likes of “The Tonight Show Starring Jimmy Fallon” or “Jimmy Kimmel Live,” especially given those shows are often watched on DVR later also.

Crackle, owned by Sony Pictures Television, has tried to present the service to Madison Avenue buyers as a TV network — one that just happens to be exclusively delivered online. Last month, Crackle presented an “upfront” in New York, separate and apart from the 2015 Digital Content NewFronts.

The upcoming season of “Comedians in Cars Getting Coffee” on Crackle will feature guest stars including Julia Louis-Dreyfus (“Veep”) in the first episode, Bill Maher (“Real Time With Bill Maher”), Steve Harvey (“The Steve Harvey Show”), Stephen Colbert (who is taking over David Letterman’s slot at CBS), Trevor Noah (new host of “The Daily Show”) and Jim Carrey.