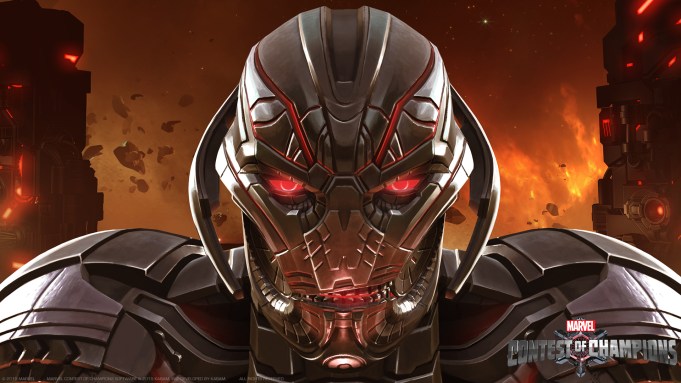 The villainous robot from the upcoming “Avengers: Age of Ultron” and other characters from the movie have joined free-to-play mobile game “Marvel Contest of Champions” — adding a new challenge as players must marshal their forces to defeat Ultron and his drones.

The fighting game, from San Francisco-based Kabam under a pact with Marvel Entertainment, has been downloaded 31 million times since its December 2014 release. The game developer expects the addition of “Ultron” content — which it has been teasing for several days — to push that number even higher.

Timed to lead into the May 1 release of “Avengers: Age of Ultron,” the update to “Contest of Champions” features exclusive Ultron-themed content throughout the game and special in-game events and arenas. Other characters from the film — including Hulkbuster, Vision and Black Widow — will show up in the game over the next few weeks.

In addition, “Contest of Champions” will feature an exclusive clip from “Avengers: Age of Ultron”: a fight scene involving Black Widow, Thor and Hawkeye.

“We jumped at the opportunity to create new Ultron-themed content that fans, like ourselves, would be psyched to play,” said Cuz Parry, creative director for Kabam’s Vancouver studio.

In the updated game, Ultron has “infected” the Contest, and players must help the Collector defeat Ultron and keep his psychotic hands off the powerful Iso-Sphere orb. Eventually, “Contest of Champions” will let users play as Ultron — once he’s defeated. “Ultimately, for the people who beat Ultron, I imagine they will be able to get him,” Parry said.

Kabam has worked with Hollywood studios on several other movie-based games, including for “Fast & Furious,” “The Hunger Games,” “The Hobbit” and “The Godfather.” The game company’s biggest title is its “Kingdoms of Camelot” franchise, which has grossed more than $250 million to date.