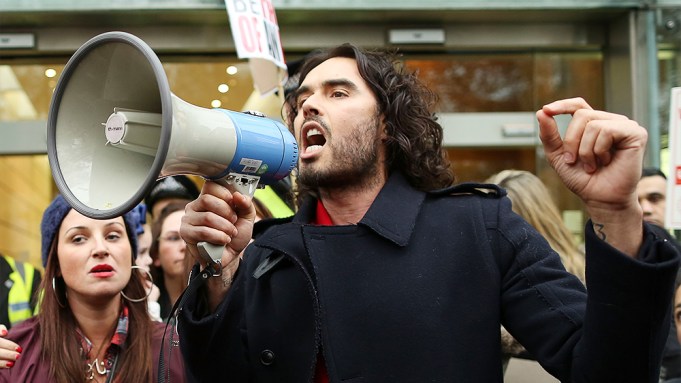 LONDON — Russell Brand has entered the U.K. election campaign by backing the left-wing Labour Party, but not in Scotland or Brighton. “You’ve got to vote Labour,” Brand told followers on his YouTube channel the Trews, ahead of Thursday’s national vote.

The move represents a reversal for the anti-capitalist comedian and actor, who in 2013 told the BBC that he had never voted and never would (see link here). It follows Brand’s  interview on the Trews last week with Labour Party leader Ed Miliband, which prompted Conservative Party chief David Cameron to say Brand was “a joke.”

Brand said he was backing Miliband because of the Labour leader’s belief in the power of community politics.

“What I heard Ed Miliband say is if we speak he will listen,” Brand said. “So on that basis I think we’ve got no choice but to take decisive action to end the danger of the Conservative Party. David Cameron might think I’m a joke, but I don’t think there is anything funny about what the Conservative Party have been doing to this country.”

Brand added that there were many issues, such as nuclear arms, where he would disagree with Miliband, but concluded: “What’s important is this bloke will be in Parliament and this bloke will listen to us. So on May 7th vote Labour; on May 8th: more democracy, more power to more communities.”

Brand qualified his endorsement of the Labour Party with regards to Scotland, and the Green Party’s only Member of Parliament, Caroline Lucas, who represents a seat in Brighton.

“If you’re Scottish, you don’t need an English person telling you what to do,” he said. “You know what you’re going to be doing. If you’re in Brighton I think it’d be a travesty if we lost the voice of Caroline Lucas in Westminster.”