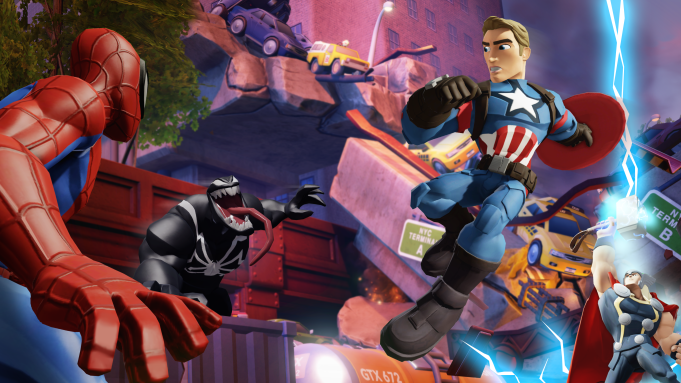 The superhero fighting game set will feature a new four-player mode and an original storyline extending the Marvel universe. Slated to launch in March 2016, “Marvel Battlegrounds” will feature Hulkbuster, Ultron and Captain America: The First Avenger — a new version of Captain America with a new pose, costume and enhanced abilities — along with other characters to be announced later.

“The four-player, arena-style combat gameplay is a perfect way for friends and families to come together and play in head-to-head battles with some of their favorite Marvel characters,” said John Blackburn, Disney Infinity senior VP and G.M.

Disney Interactive needs a refresh of the Infinity product line, and quick. For the quarter ended June 27, revenue for the division decreased by 22% year over year, to $208 million, and segment operating income fell from $29 million in the year-prior quarter to break-even. According to the company, a primary reason for the declines were lower Infinity unit sales and lower average net effective pricing.

In the storyline for “Marvel Battlegrounds,” Ultron teams with Loki in an effort to steal Asgard’s powerful Infinity Stone. The two villains create robotic replicas of the Marvel Super Heroes and turn them against each other as a diversion while they commit their crime. The superhero clones battle each other in various settings, including a wrecked Brooklyn train yard, Wakanda and SHIELD’s Lunar Base.